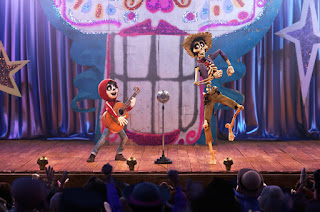 It’s rather ironic that with all this horrible controversy about a border wall between the US and Mexico over the past year, we now get a beautifully animated film that’s so rich and respectful of Mexican culture and tradition. Oh Pixar you did it again. It practically erases the critical slump you’ve had with a trifecta of “meh” releases including “The Good Dinosaur” (which I enjoyed for what it was), a fine, but unmemorable sequel “Finding Dory,” and the nearly unwatchable “Cars 3” (a film so misguided I couldn’t even bear to write even a scathing review of it). “Coco” is Pixar’s return to form and features everything you really love about a great Pixar movie: memorable characters, moments that make you cry, jaw dropping animation, and a clever and original story. In fact, “Coco” is so perfect that the only bad thing about it is that you’re forced to watch a subpar 22 minute “Frozen” short that prepares you for the feature film by forcing you to go through the five stages of grief.

“Coco” tells the story of a young Mexican boy named Miguel (Anthony Gonzalez) who loves music and aspires to be a famous guitar player like his deceased hero Ernesto de la Cruz (Benjamin Bratt). But his family forbids any form of music since Miguel’s great-great grandmother was abandoned by her musician husband. Her family now makes a living as shoemakers and music is strictly prohibited. But Miguel, like so many Disney heroes and heroines before him is a rebel and has secretly taught himself to play guitar and still longs to be a musician. He then goes on the adventure of a lifetime when he’s accidently transported to the Land of the Dead during the annual Día de los Muertos and learns a lot more about his heritage.

This “Day of the Dead” celebration is where deceased family members are honored and remembered. Well this is a Pixar film so they’ve taken a real life tradition and turned it on its head in a really fun way. Dead relatives can “visit” the world of the living if their family members have displayed their photo in an ofrendo (an alter that honors a deceased relative during the celebration). They visit by going through a customs-like border area between the afterlife and real life. While in the Land of the Dead Miguel attempts to find his deceased hero and teams up with Héctor (Gael García Berna) a down-on-his-luck musician who is trying to crossover to the Land of the Living. Might I add that all the folks over in the Land of the Dead are skeletons that are gorgeous rendered? The world that directors Lee Unkrich and Adrian Molina and their team have created is, in a word, astonishing.

And of course it’s not quite a Pixar masterpiece if you aren’t about to bawl your eyes out by the end. Music is the soul of the film and here the emotional song “Remember Me” (from the “Frozen” songwriting team) plays a crucial role. You’re probably wondering why the film is called “Coco” if the main character is a little boy named Miguel. Coco is Miguel’s extremely elderly great-grandmother and by the time the film enters its final act you are completely and emotionally sucked into this fantastic story. If you’re not fighting back tears by the end then you aren’t human. The film is about family, tradition, and the power of music and it’s another brilliant and funny piece of entertaining art from arguably the greatest animation studio ever. In other words, to miss “Coco” would be a crime against humanity. GRADE: A