Lord of the Rings: “The Greatest Showman” is a Surface-Level, Enjoyable Spectacle 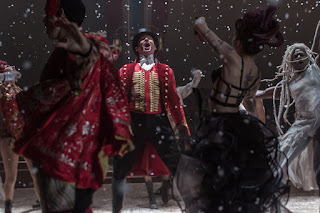 It must be said that if you're expecting to actually learn much about the life of circus man P.T. Barnum than you probably shouldn't see “The Greatest Showman.” If, however, you just want a really entertaining, gorgeous musical with high quality musical production numbers than you should definitely see “The Greatest Showman.” I went for the latter reason and thoroughly enjoyed the ride. With songs by the Oscar-winning song writing duo of “La La Land,” “The Greatest Showman” is a well-oiled musical machine featuring catchy songs, exuberant performances, and a sense of wonder. An in-depth documentary this is not, and whatever your thoughts are about the real Barnum (let's just say he's a controversial historical figure), the movie is undeniably fun. There's no real surprises in the story and it follows the formula set up by any other lavish musical but the film sends you out of the theater on a high and considering what a downer year it's been that's not the worst thing in the world.


Ripping a movie like “The Greatest Showman” apart is just way too easy. So let's focus on the positives. Hugh Jackman gives a charismatic performance as PT Barnum. He grows up constantly wanting to entertainment people. He quickly achieves what musicals are usually about (love) and so the film thankfully doesn't waste too much time on the romance between him and his wife Charity (Michelle Williams). Stuck in a routine job that he ends up losing anyways, the born-to-entertain Barnum opens a museum of curiosity. It isn't a hit and then invites strange and usual people (ie the bearded lady, a little person) which causes quite the sensation. Before he knows it the PT Barnum Circus is born.


While the film is obviously taking place in the 1800s, the film has a very modern look and feel. And that's probably for the film's benefit. The glossy pop songs, simply put, are extremely entertaining. And the visuals orchestrated by director Michael Gracey (in his feature directorial debut) are quite impressive. There's a love ballad with Barnum's eventual business partner Phillip (Zac Efron, in his first musical since 2007's brilliant “Hairspray”) and acrobat Anne (Spider-Man Homecoming's Zendaya) as they fly around on ropes under the big top. There's power pop ballad “This Is Me” sung with prowess by bearded lady Lettie Lutz (Keala Settle) and the film's opening/closing number “The Greatest Show” which brings down the curtain.


Sure the film's entertaining, but it feels like it was made by a corporation to sell tickets. Which it was. General audiences will eat it up. Even the old ladies down my row, who didn't even realize the film was a musical enjoyed it. You won't learn anything about the real PT Barnum, you won't really learn anything about the circus, and the film hits all the generic plot points to the point that it's pretty much all telegraphed. The script from Jenny Bricks and Bill Condon is pretty standard stuff but it gets the job done. And the circus, in general, while historically significant as a form of popular entertainment, is by and large a pretty terrible thing.


But you know what? I'd be lying if I didn't enjoy every minute of "The Greatest Showman." There's a power to the musical performances that are indisputable. The cinematography from Seamus McGarvey (“Atonement”) is really breathtaking. To think that a first time director was capable of creating such a beautiful looking film is pretty astonishing. The singing is great, the music is catchy, and the film looks pretty. If this film was translated to the stage, it would probably be winning a handful of Tony Awards and no one would think twice about it. The film basically functions as a 105 minute trailer for what is probably a more in-depth look at the life of PT Barnum, but what a fun trailer it is!  GRADE: B+