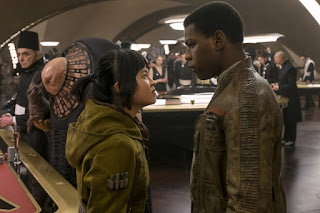 By my count, and it’s not that difficult, there are now eight Star Wars films, and technically 10 if you count spin-offs “Rogue One” and the animated “Star Wars: The Clone Wars.” By all accounts we’ve “been there and done that.” But not so fast. Those who complained that the highly entertaining reboot “The Force Awakens” followed too closely to plot elements found in “A New Hope” are in for a big surprise because “The Last Jedi,” while overwhelmingly classic Star Wars in every sense, very much takes things into its own arena. It’s glorious. This 8th adventure in the Star Wars saga is just as thrilling as ever and has some really fun and surprising story elements up its sleeve. New-to-the-franchise writer/director Rian Johnson takes some risks and directs with an assured hand; the force is strong with this one.

As the most non fanboy Star Wars “fan” imaginable (aka I’m not really much of a fan, sue me) I have to say that these new films are supremely entertaining in a way that I never felt with the original trilogy. Watching 2015’s “The Force Awakens” something awoke within me. I got that feeling a person gets when they first watch Star Wars for the first time. Something that never happened with the other six films. Though "Revenge of the Sith" came close. But since everyone’s entitled to an opinion and you obviously came here for it I’ll give it any way: “The Last Jedi” could easily be one of my favorite Star Wars films. For a film that takes nearly two and a half hours to tell its tale, I was enthralled the entire time. No need for any nitpicks here. If you can believe that space ships can travel at the speed of light there’s no need to pick apart anything else. These movies were always meant to be fun. And that’s exactly what I had.

Me trying to explain the plot of a Star Wars film is like trying to watch your grandma explain how Twitter works, so I’ll do the best I can. Not too much time has passed since the last film. Rey (Daisy Ridley) is at remote island seeking help from Luke Skywalker (Mark Hamill). General Leia (Carrie Fisher) is still leading the Resistance but they’re in extremely poor shape since the New Order can now apparently track them through hyperspeed. This sets off one of my favorite storylines which involves Finn (John Boyega) teaming up with mechanic Rose Tico (newcomer Kelly Marie Tran) to disable the New Order’s tracking device. And resistance pilot Poe (Oscar Issac) is at odds with a new leader in the Resistance named Amilyn Holdo (Laura Dern).

The last film left us so many questions like all great trilogy starters do. Why is Rey so significant? Who is this evil Snoke character? How come Chewbacca hasn’t aged at all? With expectations so high for this entry some people are bound to be either thrilled or disappointed with the many revelations throughout the film. I dug everything. And that’s mostly due to Johnson’s fantastic script and tight direction.  It has humor in all the right places, the porgs are a cute, but not distracting addition in the weird creation department, and Adam Driver still stuns as the constantly conflicted evil Ben Solo aka Kylo Ren.

“Star Wars: The Last Jedi” is just plain fun from beginning to end. The special effects are as convincing as ever, the movie has a nice worn-in look and feel that fits with the original trilogy, and it has a constantly engaging story with characters that are easy to root for. Johnson challenges the norms here in really interesting ways. There’s simply no way to predict how this one is going to turn out even if you’ve spent the last two years wasting time theorizing. Going with one of the film’s main themes, I’m certainly looking forward to the next installment.  GRADE: A