The Rock and a Hart Place: “Jumanji: Welcome to the Jungle” Entertains but Wears Thin 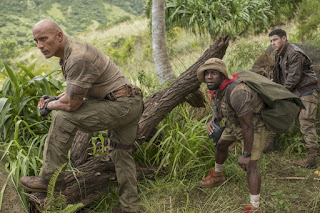 1995's “Jumanji,” while not quite the epitome of great art, was an entertaining thrill ride and didn't just depend on your fondness for the great Robin Williams. The new “Jumanji” with it's awkward “Welcome to the Jungle” subtitle, requires a serious tolerance for The Rock and comedian Kevin Hart. They're funny guys sure, but the film relies way too much on their comedic schtick. And then there's Jack Black who spends the entire film acting like a stuck-up 15 year old girl. It's a funny gag that is stretched to its limits. And let's not forget the awkwardness of modernizing the story of a board game, now a retro video game. “Jumanji: Welcome to the Jungle” is fine for a few laughs and thrills, but it's basically a one-joke movie that relies too much on its somewhat clever premise about kids being stuck in a video game. There are attempts to connect the film to its 90s predecessor, but too much time is spent watching its decently charming cast react to their surrounding and it quickly wears thin.

At the end of “Jumanji” the board game and it's beating drums ends up washed up in beach in Europe. At the beginning of “Jumanji: Welcome to the Jungle” it ends up back in the same New England town where the first film took place. The game is gifted to the son of the man who found it, and for no apparent reason, the game transforms itself into a video game which sucks in the curious teenager who begins playing it. Many years later we're introduced to several new teens who all reflect typical teenage personalities. There's the nerdy introvert Spencer (Alex Wolff), his former best friend, the dumb jock Fridge (Ser'Darius Blain), selfie-obessessed mean girl Bethany (Madison Iseman), and outcast Martha (Morgan Turner) who obviously has a thing for the equally outcast Spencer. The four kids find themselves in detention one day, stumble upon the Jumanji video game, begin playing out of sheer boredom, and end up getting sucked in and appear in the bodies of the avatars they chose. Cue a lot of dialogue that basically explains how video games work to those audience members unfamiliar with such things. And lots of “body swap” humor which mostly involves Jack Black coming across like a flamboyant gay man as he portrays the smart-phone obsessed Bethany.


The foursome then set off an adventure to finish the game and hopefully get transported back home. From here a bunch of borderline corny special effects take over. None of which are that much improved from the borderline corny special effects of the original film. There's no real sense of wonder or excitement as the film relies too much on typical body swap humor which mostly involves Bethany reacting to being trapped in a shlubby 40 year-old's body. There are way more penis jokes here then there ever were in the first film. The Rock is fine in the role but one can take so many references to the fact that Spencer how has gigantic muscles. Hart is fine basically playing himself and Karen Gillan gets decent mileage as the beautiful adventurer who's stuck wearing skimpy clothes in the jungle.


The film is directed by Jake Kasdan whose film is bright and colorful but lacks real imagination. The script meanders and struggles to make itself worth existing. It's somewhere between “this could have been a lot worse” and “why do we need this.” “Jumanji: Welcome to the Jungle” certainly doesn't need to exist and I'm still certain that if the film had nothing to do with Jumanji it would find success on its own. The movie is certainly entertaining enough and is harmless fun, I just don't think it's as smart as it thinks it is. Fans of The Rock and Kevin Hart is certainly in for a fun time, others can tread cautiously.  GRADE: C+