The Room with a View: “The Disaster Artist” is a Hilarious & Heartfelt Ode to Terrible Filmmaking 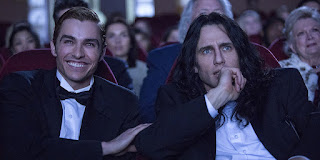 It takes a special kind of non-talent to create something as atrocious as the film “The Room.” It’s a film so flat out terrible that it seems to exist on its own plane of being. But how could a film about something so bad be so surprisingly good? Because the passion behind the love of the hatred of “The Room” propels the fantastic docudrama “The Disaster Artist” into legendary status as one of the great films about Hollywood and the film industry. Put it simply, “The Disaster Artist” is the “Ed Wood” for a new generation. It’s both a tribute and satire of such a horribly misguided piece of “art” that it seems to transcend time and space. Director James Franco has collected an impressive Robert Altman level cast to recreate the making of one of the most notorious films in Hollywood history. It’s brilliant, funny, scathing, and has an unexpected amount of depth and heart. It will leave you feeling as much as it will leave you laughing.

“The Disaster Artist” is based on the mysterious, aspiring filmmaker Tommy Wiseau and his attempt to make his own Hollywood movie after being rejected by what seems like everyone in town. He's obviously a foreigner, with a thick Eastern European accent, (though he insists he's from New Orleans) and seems to be obsessed with no one finding out anything about him. He’s played by James Franco in a show-stopping, transformative performance that is half great impersonation and half in-depth character study. Tommy moves to LA with his aspiring actor buddy Greg (Dave Franco). Tommy is such a weirdo you’d never believe he was a real person. After several attempts to get into the film business Tommy writes his own movie script and Greg reluctantly agrees to co-star, despite the fact that his script for “The Room” is utterly atrocious. Tommy finances the entire thing from his own seemingly endless pockets and so sets off an adventure of Hollywood filmmaking that is the stuff of legends.


So let’s discuss. Why exactly is “The Room” such a terrible movie and why are people obsessed with it? The film has terrible dialogue, wooden acting, characters and storylines that come and go from the film for no reason, and such horrible production values you’d think a blind person directed it. It’s one of those movies that has to be seen to be believed. Even the most talented filmmakers could never make a film this inept. The ineptitude really attracts people to “The Room.” People are fascinated by it; drawn to it. Like it holds some kind of cinematic power over them. The movie is more than just “so bad it’s good;” it’s so bad it’s legendary. Enter a group of filmmakers so obsessed with this piece of garbage, they had to make a movie about it.


As someone who loves films about filmmaking, “The Disaster Artist” hits all the right buttons. Written by Scott Neustadter and Michael H. Weber (who also wrote the brilliant “(500) Days of Summer”) the film is a both a tribute and tease of “The Room” but more importantly it’s about a friendship and how easily that can be tested. The Franco brothers obviously have great chemistry together and easily slip into their roles. Alison Brie shows up as Greg’s eventual girlfriend which begins to drive a wedge between these two guys which actually has significant bearings on the “plot” of “The Room.”


The film is also a character study of a mysterious eccentric who is unlike any other movie character you’ve ever seen. At times he’s lovable and at times he’s an asshole and Franco plays him with seemingly no effort. But there’s a degree of difficulty here and he pulls it off flawlessly. Wiseau, the character, isn't a complete moron. He just isn't very talented.  The other actors who show up to be part of “The Room” include everyone from “The Hunger Games’” alum Josh Hutcherson, to multiple Oscar-nominee Jacki Weaver who all give great dual performances as struggling actors turning in horrendous performances. Franco’s friend Seth Rogen plays a member of the crew and other Hollywood icons Sharon Stone and Melanie Griffith show up in bit roles.

The story of “The Disaster Artist,” oddly enough, is not unlike another so-bad-it’s-good cult classic, “Showgirls.” Both films are about eccentric people with mysterious pasts who struggle with achieving fame. It doesn’t feel like a coincidence. You really get the sense of love that is coming through the screen in “The Disaster Artist.” It’s fascinating to watch. Your level of enjoyment might be based on how well you know “The Room” but I don’t think it’s a necessity. Like “Ed Wood,” it’s more than just the making of a cult film; it’s about life, friendship, the creative process, and how none of that apparently made it into “The Room.” This movie is so good, it’s great.  GRADE: A