Beauty & the Beast: “The Shape of Water” Casts a Fintastic Spell 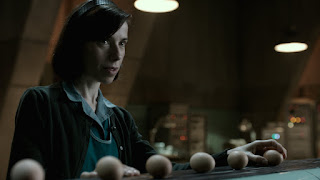 A tale as old as time. Girl meets sea creature. Sea creature meets girl. They fall in love. End of story. Guillermo del Toro has been telling fairy tales for adults for quite some time and may have finally crossed a bit into the mainstream with “The Shape of Water.” Sure it’s not going to be everybody’s cup of tea. It’s erotic and violent, but those not expecting that will probably come for the exquisite lead performance from Sally Hawkins who shows us her heart without saying anything at all. “The Shape of Water” works so well because deep down it’s a very traditional story told in a really extraordinary way. Del Toro can address a lot about society just by setting his story in a 1960s research facility where scientists have discovered a male sea creature and the lonely mute woman who falls for him. The film has some really special performances, a beautiful color palate, and a really good story that satisfies.

Sally Hawkins is great as a mute janitor named Elisa. She communicates through sign language though her hearing is fine. She’s friends with her co-worker Zelda (Octavia Spencer) who both work the late shift at a Baltimore research facility. An “asset” found in South America is brought in one day and it turns out to be an amphibious humanoid. Elisa is curious about the bizarre creature and begins leaving him hard boiled eggs to eat. Michael Shannon is the hard-ass, and horribly mean Col. Strickland who’s in charge of the research team and spends most of his time beating the thing with his electric baton. Both the creature and Elisa are “freaks” for all intends and purposes and they two form a bond, but no before things begin to get a little out of hand.

“The Shape of Water” is about connection and longing. It’s not unlike a similarly themed romance “Call Me by Your Name” that also displays another form of “forbidden” romance in an age where people were way more uptight then they are now. But of course, as much as things have improved, they tend to stay the same. Which means that stories like these are just as relevant today as they would be to when their stories take place. In that way “The Shape of Water” can easily be read as a metaphor for the once taboo subject of interracial relationships. It’s not a coincidence that Elisa’s friend and neighbor played by the always wonderful Richard Jenkins is a gay man looking for love himself.

Guillermo del Toro brings his trademark brand of whimsy and darkness to the film that balances out rather nicely. The film has some pretty disturbing and sensual elements which makes the film back to its roots of fairy tales being adult stories rather than being for kids. Even if the premise seems a little preposterous, like the best storytellers, he makes it believable. There’s a real sense of artistry here from the beautiful production design and Alexandre Desplat’s whimsical score to the film's lower budgeted byt fantastic special effects. The whole thing, even if it’s a decidedly “American” story, has a decidedly European feel. It’s a universal story that can easily be loved by anyone who needs a dose of imagination in their lives.  GRADE: A-