I Know Who You Did Last Summer: The Understated “Call Me by Your Name” is Gorgeous and Truthful 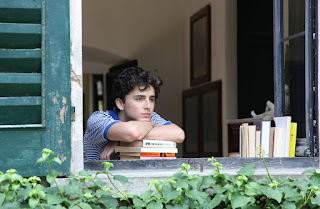 If “Lady Bird” is a comedic slice of life coming-of-age story of a 17 year-old girl from a lower middle class family, “Call Me By Your Name” is the dramatic version about a 17 year-old boy from an affluent family living abroad in Northern Italy. Both films even share a key ingredient, a new rising star named Timothée Chalamet. This gorgeous film is about desire and heartbreak (they usually go hand-in-hand) and is about that moment in your life where your views on the world open up and anything seems possible. Director Luca Guadagnino has crafted a reserved and quiet film that is almost a bit too literate. It's hard to connect to a family whose patriarch is an archeology professor and whose son refers to novels and musicians no one's really ever heard of. But on the flip-side it is easy to connect to an introspective teenager as he discovers more about himself because we've all been there at some point whether it has to do with sexuality or not. In a lot of ways the film would work well as a double feature with last year's Oscar-winner "Moonlight."

Set during the summer of 1983 in an old school sun-soaked Italian countryside, “Call Me By Your Name” can't possibly get any more beautiful. The film follows 17 year-old Elio (Chalamet) as he's forced to give up his bedroom for his professor father's graduate school research assistant moves in for the summer. This happy-go-lucky man is Oliver (Armie Hammer) and there's a fleeting connection between the introverted Elio and Oliver's more extroverted personality. From here we sort of get a collection of moments between Elio, who, while pursuing a sexual relationship with his girlfriend, find strange attraction to the new guest. Meanwhile, Oliver who also catches the eye of a young Italian woman and is strangely fascinated by Elio as well. Oliver and Elio soon form a bond that begins to go beyond mere friendship. You know the drill. It's like the Italian countryside version of “Brokeback Mountain.” It's also yet another film about gay people, who don't identify as such, who can't simply be happy and content with being who they are. They're secretive about their relationship but because this is a film set over thirty years ago there's no way they can really end up together. Of course, it doesn't help that Oliver is moving back home to the United States at the summer's end.

The film, written by James Ivory (yes from the Merchant & Ivory duo) certainly takes its time exploring the characters are they traverse various Italian locations whether it's a swimming hole or bike path. The film looks exquisite but it's a direct counterbalance of the darkness and confusion going on between the two main protagonists. They long for each other but for half the film neither of them act on it. And in those terms it feels like an extremely long waiting game. But once Oliver and Elio do finally get together it feels worth the wait and the fears and anxiety and anticipation give way to happiness and pleasure and comfort. And then the sobering realization that there's no way this can have a happy ending. Eventually the heartbreak that comes from lovers being forced to part gives way to a scene between father and son that is emotional apex of the entire film and features a truly moving piece of acting from Michael Stuhlbarg.

“Call Me by Your Name” is an ultimately moving film. Its beautifully lyrical and the performances are subtle even if a lot of the overly intellectual dialogue goes over the head once in a while. The chemistry between the leads is palatable. The film is erotic without ever being exploitative. There isn't a lot of flashy over-the-top dramatic scenes it's a very quiet film that likes to take its time. Guadagnino even uses music in a unique way and the soundtrack is filled with classical pieces and nostalgia-enduing pop tunes. Even if the film doesn't leave you on a high note, it's not dark or depressing or tragic the way some gay love stories turn out. The film is naturalistic (if not completely realistic), earns empathy for the main characters, and even though I still find it hard to identify with a family living it up in an Italian paradise (even with Italian in my blood), the film's more obvious themes are things any human being will easily find relatable. If the melancholy film doesn't immediately click with you, there are aspects that will certainly stay with you. GRADE: B+