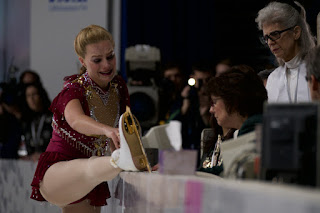 The story of the Tonya Harding scandal is so bizarre it seems like something concocted by the Coen brothers. And in that way the satirical docudrama “I, Tonya” feels like a long lost notch in the Coen’s filmography. Employing fun storytelling devices like multiple and unreliable narrators, “I, Tonya” is an ice-cold black comedy about notorious figure skater Tonya Harding that features fantastic performances, clever direction, and a truly witty screenplay. It’s the only way to tell this bizarre true-life story of a woman who had to overcome being constantly surrounded by complete jackasses.


Most people will probably see “I, Tonya” because of “the incident” as the film’s characters refer to it, but it’s pretty much a recreation of the life of Tonya Harding and her trashy upbringing and really looks to set things straight about her involvement in the 1994 attack on Nancy Kerrigan. In lesser hands this could have easily been a cheesy made-for-TV movie (there were plenty of those back in the day) but in the hands of screenwriter Steven Rogers and director Craig Gillespie, “I, Tonya” is a clever and darkly comic scathing satire of fame, class, and the pursuit of the American dream.


The film centers around the lead performance of Margot Robbie as disgraced Olympian Tonya Harding. From an early age Harding was thrust into training but her trashy, abusive mother was as much of a burden as she was her support system. This stage mother from hell is played with perfection by Allison Janney in a bravura performance that makes you cringe and laugh, usually within the same scenes. Robbie is also a revelation as Harding. She transcends mere impersonation and becomes the embodiment of someone who’s constantly being beaten down, sometimes literally. Her abusive, dimwitted husband Jeff Gillooly is played with squirmy verve by Sebastian Stan.


The characters, playing present day older versions talk to the camera in documentary style and spend the film taking turns narrating the events that lead to the Nancy Kerrigan incident. The characters often contradict each other and even break the fourth wall in scenes set during in the late 80s and early 90s. It’s a fun and clever approach to a story we’ve seen covered to death. Gillespie, no stranger to unconventional storytelling (see "Lars and the Real Girl") is obviously having fun with time and place and it works for the film. And the script is often bitingly funny but it has it’s dramatic moments as well; Harding life was hardly easy. She was constantly frowned upon from other in the industry and even the judges who refused to score her with the same standards as per competitors. And the film even if it plays with the real life a bit (Harding never told a judge to suck her dick, fyi) the film is almost shockingly accurate in the portrayal of its well-documented events.


“I, Tonya” is a fascinating little movie of a ridiculously outrageous personality. It amazes me to this day how much of a big deal the Harding story became. The film is a fun reflection of the time (with an awesome soundtrack as well) and it refuses to play by the rules in the best way possible. This isn’t your standard biopic in any sense of the term. The actors really go for it here, especially a surprisingly empathetic Robbie and an otherworldly nasty Janney who have both never been better. The film goes for the gold and the jugular.  GRADE: A

It’s hard to find knowledgeable people on this topic, but you could be seen as do you know what you are referring to! Thanks noticias deal corcon

There are some interesting points with time in this article but I do not know if I see every one of them center to heart. There is some validity but I most certainly will take hold opinion until I check into it further. Very good post , thanks and now we want a lot more! Included with Feed Burner as well   hadeel web