Dangers on a Train: “The Commuter” is Efficient But Goes Off the Rails 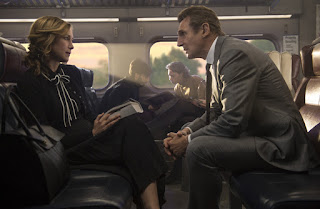 Ah the beginning of the year. When two types of films are being released into theaters: Oscar hopefuls from the previous year and usually terrible but sometimes decent genre-fare dumped there by the studios while trying to make a quick buck. Try to guess which one “The Commuter” is. Look when you settle in for a January release at the theater you have to keep your expectations in check. There's no real way a Liam Neeson thriller set aboard a NY commuter train is going to be the epitome of great cinema but here we are. I'm a sucker for a decent transportation themed action thriller. Why else would I have gone to see things like the surprisingly good “Unstoppable” and the fine, if forgettable, “Non-Stop?” Speaking of the latter, Mr. Neeson reteams with his “Non-Stop” director Jaume Collet-Serra who is quickly becoming the go-to guy for halfway decent, mindless thrillers. He worked wonders in the shark thriller “The Shallows” and I still argue that his “House of Wax” remake is stylish to a fault. Let's get real, you're not seeing “The Commuter” for its directorial achievements; the film is fine as a mindless diversion and it has a pretty impressive cast. But like most Liam Neeson thrillers it's utterly ridiculous and silly but it somehow works despite how preposterous it gets as it goes along. In other words, the movie is pretty much the guilty pleasure you've been looking for.

“The Commuter” may actually be a little too plot heavy for its own good. It's one of those films where you don't really know what's going on until certain things are revealed and even then it's not really all that shocking. Neeson plays a NYC businessman who commutes into the city daily. He knows the train life inside out and even knows some of the fellow passengers and crew members. After having just been let go from his job, with only a few years away from retirement, a stranger played by Vera Farmiga shows up and makes him an offer. She's looking for a passenger on the train and if he can find him or her then he'll get a stash of money that's hidden on the train. Seems simple enough but is anything in life that easy? Of course not. A friend of his ends up getting pushed in front of a bus which signals that people are watching him and he's now caught up in a serious conspiracy that could easily mean life or death. And then the plot goes from ridiculous to preposterous. And may even involve the train derailing.

Remember I said I was a sucker for transportation thrillers? I'd argue that “Speed” is the best. It's simple premise and dynamite execution still holds up today. This is not “Speed.” This is not even “Unstoppable.” Though it is technically better than “Under Siege 2.” Odds are you know whether you're the right audience for this movie. It's sort of dumb fun and it feels like Neeson isn't even really trying anymore. But that's ok because the film doesn't really take itself too seriously… most of the time. I don't think the story itself is as satisfying as it could have been but that's beside the point really. There's enough style and flashy camerawork to make you realize that the movie just sort of backs itself into a corner and the big twists aren't really all that exciting. It's mildly suspenseful fun if you're willing to hop on board.   GRADE: B-