“Date Movie:” If You Cringe at Romantic Comedies, You’ll Cringe Here As Well 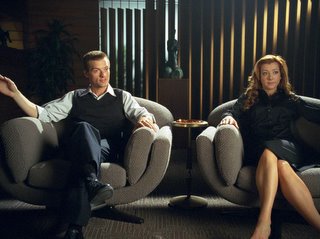 The only thing that lingers in your mind after seeing “Date Movie” is that annoying “Don’t Cha” song that is played about a gazillion times during the film. Other than that the film is quick, lame, and occasionally funny. If you’re expecting dumb this is your ticket. The problem that lies beneath the surface of Date Movie isn’t the purposely underdeveloped, clichéd characters or its “guess what movie this is from” script, is that it doesn’t pack in enough humor into its 80-minute running time. Watch about 15 minutes of any of the Scary Movie trilogy (and # 4 is on the way!!) if you want to laugh. Heck, rent Showgirls if you want to laugh. Date Movie isn’t supposed to be smart and sophisticated. If you don’t have high expectations you might find yourself having a mildly amusing time. Ok, ok maybe not.

Every recent romantic comedy is lampooned in Date Movie, which follows the likes of Not Another Teen Movie and Scary Movie. I certainly can’t wait for Action Movie, Flying & Magic Movie, or even Not Another Spoof Movie. (That’s a million dollar idea Mr. and Mr. Weinstein) Films like Meet the Parents and its sequel Meet the Fockers, My Big Fat Greek Wedding, Hitch and let’s not forget that sap-fest When Harry Met Sally… certainly get what’s coming to them. Unfortunately most of the jokes involve disgusting things being thrown in front of the camera instead of true comedy. And if this film proves anything, it’s that fat people are ugly, disgusting and really, really funny. And you guessed it, this is the type of movie where the jokes don’t really go anywhere.

Most of the actors seem rather embarrassed to be here and others are having a gay old time. Fred Willard and Jennifer “Stifler’s Mom” Coolidge are rather amusing in a take on Dustin Hoffman and Barbara Streisand’s characters from Meet the Fockers. Coolidge is funny all the time. Give her a ball of yarn and she’ll knit you one heck of a comedic scene. But of course like most of the film these characters are only funny because they’re trying to be the characters from the referenced film. Perhaps most of the jokes seemed funny written on the page but they didn’t translate very well. Of course I have to give writers Jason Friedberg and Aaron Seltzer credit if only because they had the guts to write this movie and actually film it. I’d love to make a spoof movie, but there’s no way I’d actually want to show it to anyone.

Most of the jokes that do work aren’t very memorable but are worth a few stupid chuckles. I found myself laughing at the obviously mechanical kitty cat Jinxers as he lets out oodles of bodily noises on the toilet. Toilet humor is timeless and transcends all cultures. The fact that the cat was obviously fake is what sold it to me. After all wasn’t it just so silly that Robert DeNiro’s character actually taught his cat to use the potty in Meet the Parents? Boy that cat had it coming. And of course our romantic leads Alyson Hannigan (the flute girl from American Pie) and newcomer Adam Campbell beating up a homeless man to the tune of “If You Believe in Magic” was simply rib-tickling. A take on Mr. & Mrs. Smith was amusing as well.

If you watch a lot of movies you’ll mostly have fun guessing which film is being parodied. But like most recent spoof-a-thons the jokes won’t hold up very well over time. For instance, in the 25 years since the incredible parody Airplane! first took flight, the jokes are still funny and fresh. In 25 years I hardly believe any one will ever know Date Movie ever existed. GRADE: C
Posted by Chris at 9:18 PM

You have made some good points there. I checked on the web for more info about the issue and
found most individuals will go along with your views on this web site.

A good e_cigarette review will tell you that
the electronic_cigarette simply appears like the traditional tobacco.
When on use, the atomizer is heated up by the battery, which
in turn vaporizes the e-juice to a spray mist. And many are switching from a traditional cigarette to the latest and innovative electronic cigarette.

Get together with your friends and family members, more time to enjoy each other's company,
and passing cookies together with the Xbox controller.

If you play video games in a seated position, it is important that you avoid slouching and maintain good posture.

Looper E juice is one of the best E juice flavor.