The Babysitter’s Clubbed: “When a Stranger Calls” is Light, Suspenseful Stuff 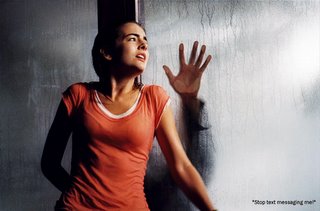 It’s amazing what a bunch of screaming 12 year olds can add to a suspense movie. As the lights dimmed and the Hilary Duff fans’ mouths didn’t shut up, I began to worry. Could the movie be ruined? Before I knew it as the chatting turned to screams which echoed throughout the theater I realized everyone was screaming for a reason: the movie is scary! We were all in the same boat. Just me and a bunch of WB fans. Who knew? When a Stranger Calls, a remake (surprise!) of the 1979 thriller of the same name, is a taut, suspenseful shocker that makes you feel uncomfortable and delights in scaring the audience right out of its pants. At about an hour in, a small group of kids ran screaming for the door.

So everyone knows the story. Like, my sister’s friend’s cousin was babysitting and she kept getting these strange phone calls from this creepy guy. And when the police went to trace the call, they found the calls were coming from inside the house. The guy had been in the house the whole time and murdered the young children without the babysitter knowing. That’s one hundred percent true. The only thing this movie is missing is the obligatory “based on actual events” insert. Okay so the story isn’t really true, but it could happen right? Well actually, part of what makes “Stranger” scary is the fact that the film is based in realism. Sort of. Come on I know this is Hollywood popcorn stuff, but work with me here. Everyone’s afraid of being home alone, especially in a strange house at night in the middle of nowhere. It’s that fear that plagues many of us. The film uses that to its advantage. And who hasn’t been a babysitter at some point? Of course the moral of the story is not take the babysitting job in the first place. But I digress.

Young Jill (Camilla Belle) is a typical teenage girl with a typical teenage life. (And she actually looks like a teenager!) Her boyfriend was caught smooching with her bestest friend and she’s devastated. She racked up a huge bill on her cell phone so her dad has cut her off. She’s grounded and has to resort to filling her weekend evenings doing more constructive things than going out and partying. Her father drives her to East Bumble Whatever to baby-sit two sleeping children in a huge high tech house with even bigger windows. There seems to be a remote control for everything, even the fireplace. So of course it’s impossible to turn on the TV. The house even comes equipped with its own tropical ecosystem with chirping birds and a pond full of fish. This is tended by Rosa the house’s maid, who we most likely won’t hear from for the rest of the movie. It’s dark its windy the house is creepy. Something evil is about to go down.

Jill is plagued by phone calls that result in more static than actual talking which seems a whole lot scarier than any dialogue a writer could come up with. The fresh young actress handles her situation as well as she can. She doesn’t stay ahead of us. After all we want her to be vulnerable. And she doesn’t do anything terribly stupid. Most of the time. The film has Jill’s friend stop by the house, which just seems kind of silly. Like they need in the film her just to kill her off. Because of course we know the more people that die in a movie the scarier it is. Not true. Director Simon West (Con Air) uses his frame to his advantage. He fills up the screen in most shots of the large windows. We are just waiting in bloody nervousness for something to come into frame. And of course you’ll need an extra hand to count the clichés but what difference does that make? This isn’t Lawrence of Arabia.

I must commend West for creating an unsettling atmosphere unlike those of The Fog or The Grudge. He also makes the villain credible, creepy and most important unseen for most of the movie. And after all he’s a real person. You won’t find Freddy or Chucky here. The film doesn’t rely on scary images of eerie children, scary puddles and the house is thankfully not haunted. It’s the realistic situation that’s frightening. Nor will you find piles of gore in this PG-13 film. Remember I mentioned the Hilary Duff fans? How else would they have gotten in? They screamed a lot and if their screams are any indication the film’s success, Sony Pictures will be screaming all the way to the bank. GRADE: B+
Posted by Chris at 11:19 PM

I constantly emailed this weblog post page to all
my associates, since if like to read it next my friends will too.

My relatives all the time say that I am killing my time here at net, however I know I am getting know-how everyday
by reading thes pleasant content.