Moore Melodramatic: Run Away from “Freedomland” 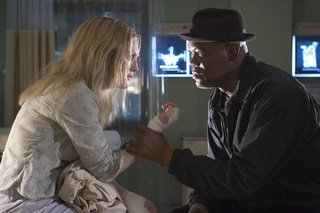 I was so ahead of “Freedomland” that I was already planning the rest of my day. Equal parts racial tension drama and Lifetime soap, Freedomland only begins to skim of the surface of what could have been a powerful film about race relations. Oh wait, but didn’t Crash just come out last year? And isn’t that film up for several Academy Awards? That’s because Crash is well written, well plotted and doesn’t manipulate its audience. If you want a gritty race drama rent something by Spike Lee. If you want dopey soapy movie-of-the-week melodrama turn on Lifetime. What you don’t want to do is sit through Freedomland.

Julianne Moore is a good actress. When given meaty roles she can bury inside a character’s psyche. However, give her weak dialogue and an over-the-top woman in despair role and she’ll be, um, over-the-top. She is a woman whose car was hijacked. She’s traumatized by the situation. She enters the hospital dazed and confused. Flash forward several hours later, and oh by the way, she just remembers her son was in the back seat of the car. The clock is set. The longer the police wait the shorter the time they have to find the kid. What does this have to do with racial tension? Well the man who stole her car just happens to be a Black man. And wouldn’t you know there’s a housing project right where her son was taken.

Of course the police quarantine these people as if they all had SARS perhaps hoping that if the carjacker is part of the community he’d be locked in too. What?? Is this making any sense?? Enter Edie Falco who is a mother of a lost son. Her and her fellow tragedy stricken mothers have formed a group that helps the police track down missing children. The search is on. Samuel L. Jackson is the cop who doesn’t dress like one, who is helping with Julianne Moore’s case. He’s got asthma or something because as she rants and raves (all that’s missing is a shaking bed and pea soup and we’d have Lind Blair from The Exorcist) about her stolen child he’s busy sucking out the last bits of his inhaler.

There are scenes of policemen yelling at the Black people in the living community and how they’re mad cause they’re being treated like dogs just because a white woman’s child just so happened to be taken by a black man. Yada yada yada. And of course a huge riot breaks out that looks like lost footage from Troy. The reason the whole racial tension plot is thrown in is to make the carjacking all the more dramatic. Whenever the director (Joe Roth of Revenge of the Nerds 2) wants the audience to feel dramatically manipulated he cuts to people arguing about race and such.
The film is basically pointless in that it seems to throw moral issues at the audience but it really doesn’t. The film doesn’t say anything about race relations. You’d probably be able to learn a better moral lesson from an episode of Full House. Skip this overdramatic dreck and rent the wonderful Oscar-nominated Crash on DVD. Steer clear of Freedomland. Frankly, I’d rather be carjacked. GRADE: D+
Posted by Chris at 6:59 PM