UPDATE: Oscar Forecast: Brokeback with a Slight Chance of Crash 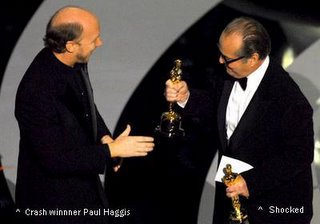 UPDATE:Well the evening started off predictably enough. George Clooney? Check. Rachel Weisz? Check. Of course things turned completely topsy turvy when Jack Nicholson read the best picture winner: CRASH. Even he couldn't believe it. The screams echoed throughout the auditorium and my house as if the Red Sox had won the World Series again. Pure pandemonium. So I was most definitely sure that Brokeback Mountain was going to take the top prize and low and behold another film crashed its planned victory. As I mentioned in my forecast, if any film were to beat Brokeback I'm awfully glad it was Crash. It deserves it. Of course the biggest surprise of the night for me? I incorrectly predicted the Best Picture of the Year... but managed to get Best Live Action Short. Go figure. 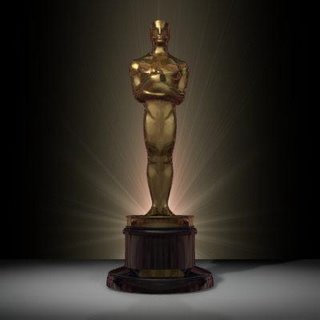 
Will Academy voters take the expected trip to "Brokeback Mountain?" Does "Capote" have a chance to "Crash" the party? And I must bid "Good Night, and Good Luck" to "Munich" because this year it’s “an honor just to be nominated.” If you’ve read ANYBODY’S Oscar predictions they are most likely right on the money. This year pre-Oscar awards and the buzz has done a good job of steering those who want to know the outcome of the Academy’s voting in the right direction. Having seen just about all the of the nominees I have decided to cast my own vote for who I think will win and who I think should win. Here we go:

Best Picture:
Will Win: Brokeback Mountain. You’d have to be living under a rock below the basement of the Republican Party National Headquarters to not know that Brokeback Mountain is most definitely going to take home the night’s biggest prize. Crash is the only film that could take away Brokeback Mountain’s glory, however the chances of that happening are slim to none. (But strange things can happen right Shakespeare in Love?) It would be the biggest surprise since The Pianist’s shocking trifecta win (Director, Actor, Screenplay).
Should Win: Brokeback Mountain is definitely most deserving of the award, but so are the other nominees. (If Crash were to win, it would certainly be just as fitting as Brokeback)However, my personal vote would go to Munich, which I gave the top spot on my Best Films of 2005 List.

Best Actress:
Will Win: Reese Witherspoon. Many have said this is the weakest selection of nominees in some time. However, there are some terrific performances here. On Sunday night it will come down to Felicity Huffman as a woman playing a man who wants to be a woman in Transamerica and Reese Witherspoon as singer June Carter in Walk the Line. Having not seen Transamerica, what I’ve heard is Ms. Huffman is extraordinary. But the actress that really stands out in this category is Ms. Witherspoon. The Academy loves giving this award to young, aspiring beautiful actresses (i.e., Halle Berry, Gwenyth Paltrow, Hilary Swank, Julia Roberts, and Charlize Theron just to name a few) which means Judi Dench will definitely have to sit this one out. It’ll be Reese’s night.
Should Win: I’m partial to Reese Witherspoon because I love Walk the Line and have not even seen Transamerica. Reese is a great actress and her charm radiated whenever she was on screen. She deserves it.

Best Actor:
Will Win: Philip Seymour Hoffman. This is a tough category for everyone in the running. This is an exceptional year for leading male performances. Everyone is deserving. Hoffman’s part is the most showy and he doesn’t just imitate author Truman Capote he becomes him. Although those who won’t vote for him will most likely vote for Heath Ledger who don't see this young actor's performance as a gimmicky parlor trick, but as a raw, emotional performance which exudes acting excellence. Having said that…
Should Win: Heath Ledger is definitely the one to look out for, because he has been just mediocre before in very mediocre movies. His performance in Brokeback Mountain as a conflicted gay ranch hand has won accolades from critics and audiences alike.

Best Director
Will Win: Ang Lee. He has been snubbed before and won’t be again come Oscar night. He made Brokeback Mountain palatable to mainstream tastes. It’s an issue film with out really being an issue film and most importantly is a very entertaining film. Having said that…
Should Win: Ang Lee! Steven Spielberg is one of my favorite directors and since he already has won this award twice I’m willing to share the wealth. Besides he was snubbed for directing War of the Worlds this year! Ok maybe snubbed isn’t the right word.

Best Supporting Actress:
Will Win: Rachel Weisz. I have to go with her simply because she has the most buzz and has collected the most awards. This is of course, one of the hardest categories to call. Many upsets have happened here in the past. Remember when Marcia Gay Harden won for Pollack? NO ONE saw that coming. Many believe votes will be split between her and Michelle Williams for Brokeback Mountain. Which of course leaves a surprise nominee available to snag the prize. Having said that…
Should Win: Amy Adams. I wasn’t all that impressed with Ms. Weisz in The Constant Gardener. She’s the heart of the film yes, but Amy Adams is also the heart of her film Junebug. A wickedly fun independent film, Adams plays a naïve, pregnant Southern woman who wants to name her child Junebug! Her performance is wonderful because she makes you laugh and shows great vulnerable emotion as well. The Academy loves funny supporting ladies. Remember Marisa Tomei and Mira Sorvino? My vote is for Amy.

Best Supporting Actor:
Will Win: George Clooney. Clooney is nearly a lock because he has come such a long way since guest starring on an episode of The Golden Girls. (Although everyone seems to remember him on The Facts of Life) With three nominations this year, the Academy obviously WANTS to reward him, and this is where they are most likely to do it. Paul Giamatti is the most possible upset, after his previous “snubs.” If he were to take the gold it would simply be a sympathy win. Of course watch out for dark horse Matt Dillon. Speaking of which…
Should Win: Matt Dillon. Mr. Dillon has come a long way since his teen years and as Crash’s solo acting nominee, his performance provides that film’s greatest dramatic arch.

Best Cinematography: Brokeback Mountain, or could Geisha prove too beautiful to ignore?

Best Original Song: Crash ("In the Deep") or could it be a pimped out night for Hustle & Flow?

Best Makeup: The Chronicles of Narnia: The Lion, the Witch and the Wardrobe

Best Sound Editing: King Kong, although the aliens in War of the Worlds sounded scarier

Best Visual Effects: King Kong, but I did hear that lion looked awfully realistic in Narnia

Best Animated Feature Film: Wallace & Gromit in The Curse of the Were-Rabbit