Match Game: “Thank You For Smoking” Cast Lights Up the Screen 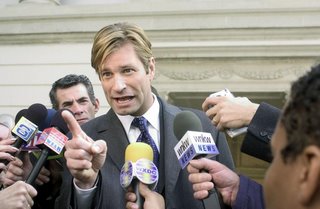 If we can’t laugh at people who die from smoking cigarettes who can we laugh at? Just about the entire civilized world knows that smoking cigarettes isn’t the healthiest way to live. Neither is eating fatty foods. Or staring at the TV for ten hours a day. And how about binge drinking every weekend? Most of us are smart enough to know the dangers we put upon our bodies but is it really anything to laugh about? Of course! That is the feeling you get from watching the morally charged film Thank You for Smoking. The film’s hero is a lobbyist who speaks on behalf of cigarettes. He wants everyone to smoke. Even you. For everyone that doesn’t smoke he is out one customer and for every smoker that dies, he’s out one more.

A film that deals with such a hot health topic is sure to set off alarms for some people. How can a film’s main character endorse such an addictive, unhealthy habit? As Nick Naylor, played with warm zest by Aaron Eckhart, a spokesman for cigarettes, he sees such items as just a product. He wants to sell them and he wants to make money. His real goal however isn’t really just to sell these tobacco products, but to convince others that they aren’t as dangerous as they seem. So what we have here is a battle of wits. He doesn’t have to prove that his side of this health issue is right; he just has to prove the other side is wrong. This is a lesson that he teaches his young son, who ends up winning his school’s debating championship. I guess live with a lobbyist and reap all the benefits.

Nick much match wits with his main adversary Senator Finistirre (an always wonderful William H. Macy) who is hot on a campaign to attach a skull & cross bones logo on every cigarette package as a warning that these tobacco products are just as poisonous as anything found underneath your kitchen sink. Of course Mr. Naylor isn’t too worried because his wildly cool confidence can win over just about anyone. On a talk show with Joan London that opens the film, Nick wins the heart of the audience by proving he wants a sick boy dying of cancer to live, if only so he can keep on smoking. Nick also spends once a week with the “Merchants of Death” his friends (David Koechner & Maria Bello) who speak on behalf of guns and alcohol. Their conversations are witty, sly and downright funny. Here we are at the end of March and we’re already skewering America’s health crisis. I guess 2005 couldn’t hold all of those political charged films.

As written and directed by filmmaker Ivan Reitman’s son Jason, the film has a biting sense of humor and knows exactly what it wants to do. But as the film’s only real quibble I felt its bite wasn’t as big as its bark. While the satire thankfully doesn’t go over the edge, it really doesn’t reach it either. Scenes like the one that opens the film and with the Merchants of Death are strong, but when Nick comes up with an idea to implant cigarettes into the hands of sexy Hollywood stars in the movies it never goes as far as I would have liked.

The entire cast, from Katie Holms as a sneaky reporter who’s screwed over in more ways than one, to a brief appearance by The OC’s Adam Brody, is sensational. They all appear to be having a great time. We have a slick satire that is wholly enjoyable and filled with smart laughs. If this is only a preview of what’s to come for the rest of 2006, I can’t wait. GRADE: B+
Posted by Chris at 10:50 PM

Nice idea with this site its better than most of the rubbish I come across.
»

My brother recommended I may like this web site.

He used to be entirely right. This submit actually made my day.
You can not imagine just how a lot time I had spent for this information! Thanks!