Heist Anxiety: Spike Lee’s Joint “Inside Man” Has its Moments 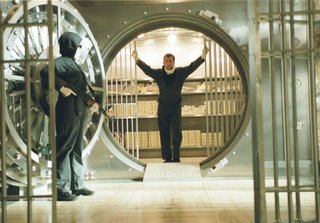 What are typical elements of a hostage movie? Masked robbers? A bank vault full of unmarked bills? That one hostage who makes a stupid move because he feels he can save the day? What about the negotiator that runs the outside world and speaks to the robber via direct phone line? How about the demanding of a jetliner as getaway? Sure these are in just about every hostage movie. Some of these appear in Spike Lee’s new “joint” entitled Inside Man and others don’t. There are good things about the movie and there are quibbles. The good things outnumber the quibbles. Let’s examine things more closely.

The film opens with Dalton Russell (Clive Owen), addressing us, the audience. I gather we are going to be good friends. When we learn later in the movie that Mr. Owen is the man behind a white mask who just took an upscale New York City bank hostage, perhaps we’re on his side. Dalton and his buddies are scary and intimidating and they certainly mean business. This scene of them taking over the bank is rather suspenseful. This film must but serious right? Soon however, we learn that Dalton Russell is more like Danny Ocean in Ocean’s 11, cool and in charge. He’s a bad guy we’re supposed to like. So if we’re supposed to like him? Who are we supposed to dislike?

Enter two mysterious figures: Arthur Case (Christopher Plummer) as the owner of the entire bank chain & Madeline White (a fabulously pointy and stern Jodie Foster) as the inside woman if you will who knows high people in sketchy places. We learn that old fogy Arthur perhaps has something to hide in the bank that is being robbed and he enlists Madeline’s help. Perhaps this a major plot point or perhaps it’s just a red herring, but it’s a mystery nonetheless. I guess this is isn’t your typical hostage movie.

Then we have Denzel Washington as Detective Keith Frazier the hostage negotiator who wants to know exactly what the robbers want. And it doesn’t seem like they just want cold hard cash. When Det. Frazier isn’t trying to figure out what’s going on inside the bank in the present, he spends the future in soft, colorless scenes interrogating the hostages, some of who may or may not have been the robbers. So apparently the robbers get away? There goes the suspense. But not entirely.

While the beginning of the film when the robbers enter the bank is suspenseful, what’s really intriguing is what Arthur wants. Is he in on it? What does he have to hide? And of course, how much do we as an audience love seeing Jodie Foster playing wildly against type?

Remember I mentioned that this was a Spike Lee joint. So how much does the outspoken, mostly independent director put his own spin on the bank robbery situation? He uses cool camera tricks and adds his own racial tension flair to decent use. A cop mistaking a hostage for an Arab is funny in this post 9/11 world. Unfortunately, we don’t get the moral situations that were so present in say Do the Right Thing. And he certainly doesn’t offend like many found in his under appreciated Bamboozled. This isn’t a film about the ethical & racial implications of bank robbery, but it is a fun, entertaining two hours. I could think of worse ways to spend a dog day afternoon. GRADE: B-
Posted by Chris at 8:47 AM

You have, of course, checked out http://pinger.blogflux.com, right? An
author uses that to manually get all the biggest spiders in gear, on
demand. I use it every time I add a new post.
Online Earning

What a great site, how do you build such a cool site, its excellent.
»

My brother recommended I might like this blog. He
was entirely right. This post actually made my day. You can not imagine just how
much time I had spent for this info! Thanks!


Also visit my homepage :: Realm of The Mad God Hacking