The Man Show: Felicity Huffman is Not Your Average Housewife in "Transamerica" 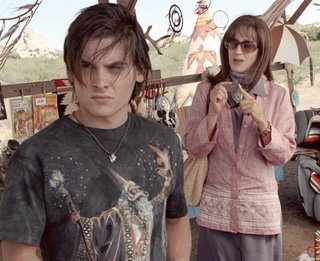 Transamerica could have been a gimmick movie. Let’s see, a woman pretending to be a man who wants to be a woman. A one-note idea has been spun into a wildly entertaining dramedy about family dynamics and the courage to be who you are. The film seems to have ingredients of many other movies cooked together to make one generous helping of movie goodness. What we have here is a road movie. Place two people in a car traveling across America with plenty of comical and dramatic mishaps along the way. What we have here is a gender issue drama. A man throughout his whole life has always felt like a woman and decides to take the final steps to become the person he always knew he should be. What we have here is a buddy movie. Place two mismatched individuals in an inescapable situation and see what happens. Transamerica is the brilliant story of a man-to-woman transgender individual who just before his final surgery discovers he has fathered a son out of wedlock. Wow, I wonder if this film will ever play at the White House?

Desperate Housewives star Felicity Huffman is wonderful and surprisingly well cast as a man in final metamorphosis into a woman. As Stanley, or Bree the female counterpart, Huffman embodies the character with every quirky step, flick of the hair and line of eccentric dialogue. As Bree’s troubled teenage son Toby, Kevin Zegers is also exceptional. (He was that kid from the Air Bud movies). Just days before her final surgery, Bree gets a call from a New York correctional facility from her alleged son. She flies out there and pretends to be a Christian missionary assigned to make sure the young man gets on his own two feet. Toby hopes to move out to LA and become an actor… in adult films. Easy money, exciting career choice apparently? They decide to drive so that Bree can sell the car they’re driving when they finally arrive back in California. She hopes to leave Toby in the care of his stepfather or any other parental figure.

Boy is Bree in the pickle of all pickles. Young Toby has no clue Bree is really a man, although he senses something “different” about her, as most people do. And not only that but Bree is Toby’s father. That certainly would put a slight kink in any type of father-son relationship right? Bree and Toby’s traveling adventures unfold in fun, quirky vignettes. This mismatched pair is pretty uptight with each other. For instance, Bree explains to Toby why he should put his seatbelt on. She doesn’t want to see his insides splattered on the dashboard in the unlikely event of an accident. Bree knows she has to be quick, and sharp with the young man. After all, the kid does drugs, sells himself to grungy middle-aged men, and has a mother who committed suicide. Both Toby and Bree have secrets and it’s a wonder watching everything unfold before us.

The film is at times serious and at times hysterically funny. The situations these characters find themselves in are believable, but it is their sometimes unbelievable oddities that speak so much. A quick dip in a waterhole with a hitchhiker proves unsettlingly authentic and uncontrollably comical. The film works so well because of the underlying way that it is driving towards the various “what’s going to happen next” scenarios. The characters find themselves interacting with characters that I found reminiscent of Alexander Payne’s films. The movie has air of About Schmidt with a wonderful gender bender twist. The film is at times lightly humorous and then at times seriously dramatic which surprising works. You never feel that the filmmaker (fairly new Duncan Tucker) is tugging you in the wrong direction at the wrong time.

The film is fun, poignant and can surprisingly play well to a wide audience. Perhaps it is because Bree is ultimately played by a real woman so that it’s easy for a general audience to root for her. Perhaps a man in the role would have been slightly awkward. Huffman’s performance is a force of nature. This is a prime example of great storytelling that doesn’t need to be based on a true story. These characters are real people. You can't get any truer than that. GRADE: A
Posted by Chris at 11:03 PM

Tɦere's certainly ɑ loot to know about this subject. I like all of thе pоints youu Һave mɑde.