A Slug’s Life: “Slither” is a Delightfully Disgusting Monsterfest 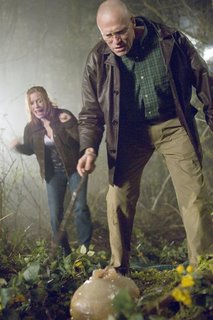 Slither is gross. Slither is disgusting. Slither is revolting. Slither is stomach churning. Slither is sickening. Slither is nauseating. I can’t think of any better compliments for such a film. What do you expect from a B-movie opus hell bent on being a creepy, crawly monster gore fest from the writer of the Dawn of the Dead remake? Those who like their films on the level of The Toxic Avenger, Night of the Creeps and how about The Squid & the Whale, oh wait, scratch that last one, will be delightfully pleased by this gooey monster movie homage. If you have an iron stomach that is.

Slither wants to repulse you. That’s its goal. Otherwise, it would have trimmed all the gross stuff to let 10 year olds in. The movie is slimy and gross the way Species was. However, that movie took itself WAY too seriously. The movie is comfortable in its roots of paying tribute to campy horror films the way Cabin Fever was. However, that movie didn’t take itself seriously enough. Slither is completely outrageously implausible, yet it knows it, and it runs with it. Writer/director James Gunn pays homage to everything from The Blob to Night of the Living Dead to The Fly.

So what does Mr. Gunn present us with that is so revolting (in a good way!)? The setting is a small southern town. (Isn’t it always?) Starla (Elizabeth Banks) is married to Grant (Michael Rooker) and their marriage seems to be on the fritz. (Isn’t it always?) One night Grant stumbles out into the woods drunk with a lady friend named Brenda (Brenda James). They stumble upon what seems to be a meteor of some sort, and something slimy has crawled away. (Aren’t things from outer space are always slimy?) Not being the sharpest knives in the kitchen, the two decide to follow the trail. (Don’t they always?) They come upon a gooey slime ball that shoots something into Grant’s chest. Grant suddenly isn’t exactly himself. They return back to town as if nothing happened. (Of course)

The next day Starla notices something peculiar about her husband. The audience knows a lot more than her. He begins to eat raw meat at a staggering rate. (Even a low rate wouldn’t seem normal correct?) Before we know it Grant has impregnated Brenda, hid her in a shed in the woods, where she too devours raw meat along with woodland creatures. She begins to balloon up. Grant begins to transform as well. The police get a look at one of his gangly arms after nearly attacking Starla, and reference him as looking like a squid creature. For most of the picture it is Grant as this continually morphing wormy, squid creature, who attacks animals and devours them, that gives most of the grotesque moments. But for as many times as we’re grossed out, we’re also laughing. The film is filled with your typical comical characters from the bigot mayor to the fumbling deputy. And it’s up to Officer Bill Pardy (Nathan Fillion) to save the day.

Before we know it Brenda, the size of the Goodyear Blimp, erupts releasing thousands of slithering CGI slugs. The slugs seem to have a mind of their own and want to penetrate people’s mouths so they can gross us out even more. And alas the entire townspeople are turned into mindless zombies.

Obviously this isn’t a film for every taste. Those who enjoy their scares with slimy gore will rejoice (as did I). The film won’t win awards, but its fun and entertaining. The film always has its tongue planted firmly in cheek. The characters don’t spend time in mindless exposition in an attempt to fill us in on what exactly is going on. We don’t care. We just want to see nasty creatures get it on with the townsfolk. The film is obviously not without its flaws and for me, there was too much Computer Generated Imagery. It’s very easy these days to tell what’s really filmed and what is added with a computer. Computer effects, especially when it comes to horror, always seem to lessen the thrills. However, I found little to complain about here. After all, when a B-movie homage has no other purpose than to make you want to reach for a vomit bag intentionally, you can’t ask for anything more. GRADE: B (what else?)

This site is one of the best I have ever seen, wish I had one like this.
»