“United 93:” The First 9/11 Film is a Stirring Account of America’s Darkest Day 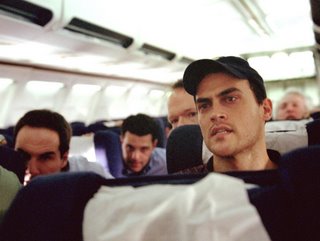 Much talk has come from director Paul Greengrass making a Hollywood film about the events of September 11, 2001. In what will most likely be one of the two most controversial films of the year, (the other being Oliver Stone’s take on 9/11 “World Trade Center” coming in August) Greengrass simply wants to present America with a story of ordinary people, on an ordinary day, who were forced to deal with unbearable tragedy. Perhaps most of us aren’t “ready” for Hollywood films to address the subject of 9/11. But does that mean filmmakers shouldn’t have the option to tell a true American story?

United 93 focuses mostly on the events of that day that seem to not be as well known. We all have the images of those two planes striking the World Trade Center. The rising smoke being the only thing in the bright blue sky. Those pictures are etched in our minds. The Pentagon in DC was also hit, but there were a lot of other things going on that day. One of which was the hijacking of United Airlines Flight 93. It took off from Newark and was en route to California, when it too was taken over by hijackers with the alleged intention of crashing into the Capital or White House in Washington DC. Because of certain complications, this flight was different from those of the three other planes. This is United 93’s story.

The film is simply and undoubtedly an observation. The film takes us into the national air traffic controls and airport towers in New York where we see normal people at work. The film basically reenacts the events of that day in real time. The film opens on the hijackers praying and preparing in a hotel room the night before. Perhaps the filmmakers chose to begin the film like this because many refuse to believe those responsible for that day’s horrible events were, in fact, other human beings. A haunting aerial shot of NYC the night before depicts the city unaware of the doom to come. No attempt is made to introduce characters. There is no backstory. The acting is naturalistic and most of the unfamiliar actors are not even actors at all. What we have is one of the most unconventional Hollywood films I’ve ever seen. And that is the way a film about 9/11 should be probably be made. There is no attempt to turn this story into a "Pearl Harbor" or "Air Force One." All that clichéd stuff is thankfully, and not surprisingly, thrown out the window. The film is more like a documentary and doesn’t turn the passengers into inhuman action stars.

The film is intense, gripping, emotional, and unflinching in its reenactment of 9/11. Any film dealing with the subject matter is going to be, but the movie is never exploitative. Director and writer Paul Greengrass doesn’t use the horrors of 9/11 to make the film “entertaining.”He simply depicts events. The film accurately portrays the pandemonium and confusion going on while certain flights were being hijacked. Phone calls to the president come with no response. There was a certain lack of communication that day and the film masterfully shows the disbelief that so many planes could be taken over all at once. The film never steps out of the air traffic towers or from the plane. We don’t get to see what’s going on elsewhere. It makes no political statements and doesn’t blame anyone.

As the scenes on-board the plane progress it becomes extremely heart-wrenching. However, the passengers and crew on this particular flight were able to plan to counteract the hijackers in hopes of just being proactive. These were everyday people who were faced with an awful situation. Because their flight was delayed and they were able to make contact with the ground, they learned of the other plane's fates and felt something could be done. They sensed vulnerability in the hijackers, which was true. After all they too were human and nervous and the film doesn’t portray them as invincible supervillians. Scenes crosscut with the passengers praying along with the hijackers doing the same. Phone calls of passengers saying their goodbyes are heartbreaking.

The film honors those that gave their lives on 9/11 and doesn’t exploit their tragedy for our sake. The film wants to be accurate in every detail and refuses to sensationalize what happened. This is a difficult, moving piece of American filmmaking. The film doesn’t want us to forget the events of that day. Like any of us ever could. GRADE: A
Posted by Chris at 9:16 AM