Mr. Scientology is Back in the Explosive “Mission: Impossible III,” Just Accept It 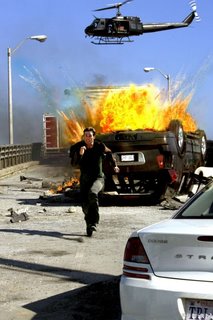 The first Mission: Impossible movie could have easily been called Mission: Incomprehensible. The plot of that film is so intricate and complicated it would of helped had it been spoken in German. But we accept what’s going on and just go with it. We know there are good guys and bad guys and its suspenseful seeing the good guys try and outsmart the bad guys. The second Mission: Impossible film’s story was a lot more streamlined but so was everything else in the film. The characters were just caricatures who spent half the movie running or driving around in slow motion with John Woo’s trademark birds flapping around in the background. Mission: Impossible III while not altogether original or brilliant manages to take the best aspects of the first two films and make a fun and exciting spy caper.

Thankfully taking the helm this time is first time director J.J. Abrams, creator of TV’s Alias and the sensational Lost. Abrams breathes some new life into the MI franchise by infusing the necessary items a film like this should have: an appealing visual style, action scenes that support and enhance the story, and of course all the behind the scenes spy stuff. Most of the film is shot using handheld cameras, which added a sense of urgency to the proceedings. It’s very hard to think any of the characters’ lives are really at stake when someone like Tom Cruise is the star. I really enjoyed the color palette of the film with its strong use of yellows and blues that seemed rather rare for a film like this. The film opens with a disjointing scene in which Cruise is tied up while Oscar-winning Capote star Philip Seymour Hoffman wields a gun next to a pretty girl’s face. In what could have easily been setup for a “woman in crisis” story the film fortunately doesn’t follow that lead.

The story does involve some unnecessarily complicated plot proceedings that seemed better left to Mission: Impossible I but I’m not really complaining. Let’s just say that Hitchcock would be proud because this entire plot of the film is a McGuffin. If you don’t know what a McGuffin is perhaps you shouldn’t be reading this. Take a film class for God’s sake! The film wants to be twisty without being confusing, but when it comes right down to it you get so caught up in what you think might be going on that you just go with it. I’d have to say at times I was a bit, lost (No pun intended). Which is why I won’t attempt to tell you what the film is really about.

Hoffman was a great choice to play the bad guy, which is one of the reasons the third Impossible outing stands out. We’re so used to Hoffman playing the nerdy or repressed supporting role that it seems so fresh to hear him say lines like “I’m gonna hurt her. And then I’m gonna kill you right in front of her.” Although it does seem like he’s just playing a more homicidal version of his creepy stalker character from Happiness. But I digress. And of course as Ethan Hunt, Cruise is really just playing Tom Cruise without the crazy jumping on couches thing. And his wife seems like more of a stand in for Katie Holms. You never really look up at the screen and say “Wow I wonder if Ethan Hunt is going to make it out alive.” But that’s to be expected.

This film probably has more action than the first two films combined which seems surprising given the John Woo treatment of number 2. The action setups seem natural in the way the film plays out. It’s never as if, ok things are getting slow, let’s blow something up. And remember I mentioned the spy stuff? While the second film seemed to forget it was a spy film, number 3 doesn’t. In one of the film’s coolest scenes we actually get to see Cruise’s team make a Philip Seymour Hoffman mask and in the blink of an eye we go from watching Cruise wearing a mask to the actual actor. Now THAT’S a visual effect.

Mission: Impossible III won’t win awards and it probably won’t really be remembered come ten years. It is however a great start to what looks like a great summer movie season. If this is any indication as to what the next few months has in store, it’s going to be impossible to wait. The film is cool and entertaining and fresh even at number three. Everyone involved with MI3? Mission accomplished. GRADE: B+
Posted by Chris at 7:50 AM