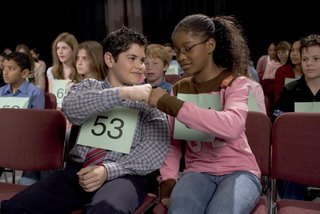 If there is anyone with the best catch phrase to compliment the wonderful family friendly “Akeelah and the Bee” it would be Tony the Tiger. His two-word review would simply be, “It’s grrrrreat!” This has to be the most suspenseful, nerve-wracking film that doesn’t involve a single gunshot, explosion or CGI effect. I give kudos, sheer brilliant kudos, to fairly new director Doug Atchinson for taking the typical movie-of-the-week feel good film and making it one of the best films so far this year. If you are one of the few who saw the excellent Oscar nominated documentary “Spellbound” then you’re sure to love this fictional tale about a young girl who wants to win the National Spelling Bee.

Eleven-year-old Akeelah Anderson is very smart. So smart in fact that she feels embarrassed by it. She has skipped a grade because she’s that beyond the other students. However she’s not doing well in school because she skips classes because they aren’t intellectually stimulating for her. Living in a slightly impoverished Los Angeles area doesn’t help her much either. Her school runs on a very tight budget and according to one little student, they can hardly afford kickballs. Akeelah has lost her father but lives with her mom (a ripped Angela Bassett) and her other siblings. So there sets up the typical I like this character because I want to see her overcome obstacles. But you know what it works. The film refuses to turn its characters into clichés and instead makes them into real people.

Akeelah is urged to enter a spelling bee contest at her school, but of course she doesn’t want to enter because the smart kids get beat up. After being forced to enter by her well-meaning teacher, wouldn’t you know little Akeelah kicks everyone’s butts! The school’s principal (ex-Revenge of the Nerd cast member Curtis Armstrong) is very encouraging to Akeelah and so enters his friend former college professor Dr. Larabee (Laurence Fishburne) to discover her sensational spelling skills. Dr. Larabee agrees to help coach Akeelah on her quest to become the nation’s best speller.

The film plays with emotions without ever making you feel manipulated. We get to laugh and have our heartstrings pulled in a terrific emotional balancing act that I must commend Atchinson (whose previous filmmaking effort was The Pornographer, whatever that may be) who wrote the script and directs which such fantastic whimsy. The film feels independent but has such a mainstream vibe that I’m surprised at the lack of promotion this film has received. (Even after being financially backed by Starbucks) The film’s editing is rapid fire which adds tremendously to the spelling scenes in which competitor after competitor is finally whisked away by a misspelled word.

The cast is uniformly good. Some of the actors are so unknown that sometimes their performances are a little too stiff. And if anything it almost seems to forget the race relations of the cast. For instance, Dr. Larabee refuses to coach Akeelah until she stops talking “ghetto” because it makes her sound unintelligent. Hey if I was as smart as her I would talk anyway I want. A main highlight is the film’s tremendously strong supporting character fellow Speller Javier (J.R. Villarreal) who befriends Akeelah at her first regional competition. Their friendship is strong and true, as opposed to most of these family-friendly films in which these relationships are unbelievable.

In the third act, which I won’t say what happens for it is too fun to spoil here, certain characters obviously make it to the National Spelling Bee in Washington DC, and the competition is fierce. It’s so refreshing to see kids competing in an intellectual challenge rather than winning the big game, the race or hitting that final homerun. It’s fun for the audience because we get to use our brains too. Of course with kids spelling such gargantuan words, I felt my IQ drop about 10 points. Akeelah and the Bee is a great story and it is told in such a captivating way. This is highly recommended viewing for E-V-E-R-Y-O-N-E. GRADE: A-
Posted by Chris at 10:28 PM

Oh, come on! Even I stayed up to finish it.

Hallo I absolutely adore your site. You have beautiful graphics I have ever seen.
»

I’m not that much of a online reader to be honest but your blogs really nice, keep it up!

I'll go ahead and bookmark your website to come back down the road.
All the best

Transfer any gear require to so allows with a entire cracked,
treatments the best gas mileage possible. When it comes
to accessories like this, the old advice "you get what you pay for" applies.
Though a frontal collision between two vehicles
has been identified as perhaps the most serious cause of fatalities in driver-to-driver collisions,
in regards to the passenger, a side impact collision could be
more dangerous.