Into the Woods: Satirically Ripe “Over the Hedge” Confirms We’re Living in a Fast Food Nation 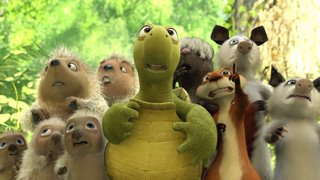 How appropriate that half the audience was chomping on fresh, hot popcorn smothered in fake buttery goodness, while watching “Over the Hedge?” From the makers of Shrek and Madagascar, we now have Over the Hedge a wonderful animated film with laughs, beautiful computer generated imagery and witty social commentary to boot. The animators and writers get everything right about a small group of woodland creatures who wake up one spring to find that a huge hedge has cut them off from the rest of the forest. Of course, on the other side is a housing development where the homes and families seemed to have been xeroxed. We get a cute movie that’s not cutesy and a satirical take on suburban community without forgetting this is a warm family adventure.

First of all the animation here is beautiful. Not since Finding Nemo have I been so impressed with the colors and shapes of an animated film. With so many CGI animated films being released it’s easy to forget which ones really stand out. The animal characters are lifelike but still very much cartoony, if that’s even a real word. The textures are simply smashing. The leader of the group a humble turtle, much like Marlin in Finding Nemo, named Verne (Gary Shandling) just looks so squishy I wanted to reach out and squeeze his adorable, green head. The fur on the critters is also extremely realistic. Every animated movie is just more amazing than the next, but it seems terrifying to think there wouldn’t be the need for live action films anymore. What a scary, dark future that would be!

So what’s the film all about anyways? Verne is the unofficial leader of a small band of kind woodland creatures including as a porcupine family, a father and daughter opossum family, a wacked out squirrel, and a wisecracking skunk. After waking up from hibernation, they realize there’s no food left and human beings have been moving in on their turf. The one saving grace is the loner, know-how raccoon named RJ (Bruce Willis) who owes a large debt to a big brown bear. RJ has a week to gather months and months worth of food or else he becomes lunch. RJ introduces the gang to everything human from nacho chips to watching television. The suburban society on the other side of the hedge is an extreme reflection of how many people live their lives. Of course it's not that far off. A nice house with all the perks, gas guzzling SUVs, Girl Scouts selling cookies door to door and junk food junk food junk food!

The characters are so funny (and terrifically voiced by such comic gems as Eugene Levy, Catherine O’Hara, Steve Carell, and Wanda Sykes) because they’re not a very far exaggeration from their real life counterparts. For instance, the opossum plays dead when threatened, this is milked for all it’s worth and it’s hysterical. The film isn’t without its influences. There seems to be strong aura of the early Pixar hits Toy Story and A Bug’s Life. There are some pop culture references ala the Shrek films without ever coming close to going overboard like those films do. (Fake product placement is used effectively, those are supposed to be Pringles right?) And Allison Janney voices an evil suburban, possibly desperate, housewife with a Cruella DeVil streak and Thomas Haden Church gives voice to a slightly sadistic pest control guy.

What these animals do and go through is really true to life. It’s like an Amish village unaware of the perks of suburban life, the creatures are awed by the humans' technology and ways of life but ultimately realize all that stuff means nothing without the ones you love. This movie is gorgeous, fresh, and just plain fun. Now grab some junk food, and see it already! GRADE: A-
Posted by Chris at 7:58 AM

Anonymous said...
This comment has been removed by a blog administrator.
7:58 AM

Your are Nice. And so is your site! Maybe you need some more pictures. Will return in the near future.
»

Thank you so much for this post I felt really great after reading it.
i enjoy a lot from it and i'm really thankful for each and every information.
pinoy teleserye