Shouldn’t They Be Called X-People? “X-Men: The Last Stand:” Sufficient but Far From X-cellent 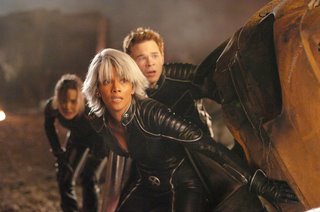 The third go round of the popular X-Men films is simply a fun, entertaining film. The movie plays out like a chapter in a TV series that feels it needs to have strange things happen (read: kill) to its main characters just to get high ratings. I can see fans of these films either loving it, or hating it. Nonetheless I was surprised with what transpired in X-Men: The Last Stand, and while it is fine summer entertainment it seems to set up good ideas for a great movie and doesn’t really pull its weight in creating the possible(?) ending to a popular comic book cinematic trilogy. Perhaps director Brett Ratner, taking the reigns from Bryan Singer who opted to direct Superman Returns instead, just wasn’t the right guy after all to have the mutants tell their third story.

The X-Men films have always dealt with sociopolitical themes with the conflict of humans vs. mutants, with the mutants very much standing in for modern suppressed people such as homosexuals and other societal minorities. The big idea in this third go-round is in the not so distant future scientists have come up with a “cure” for the mutant x-gene that “plagues” much of society. There are the mutants that would do anything to be cured and others that oppose the need to be cured of what many think of as an illness and threat to society. This idea of a cure is a wonderful plot idea for an X-Men film (perhaps a 4th installment will involve the mutants' right to marriage?) but I don’t think it all plays out too well. The first two X-Men films, while based on comic books, always took themselves seriously for the most part. You always felt an emotional connection to the characters, whether it being Rogue not being able to touch the ones she loves to Iceman having to confess to his family that he’s a mutant. I can’t help but feel that this third film has decided to take more of a Fantastic Four route and watered things down a bit. We get some cheesy dialogue and some campy acting. This can work in many films of this type, but I feel the X-Men movies have been too good for this kind of approach. The slight silliness seems to undercut the powerful, emotional idea that mutants might be cured and be able to live a “normal” lifestyle.

All of the main cast returns including Halle Berry as Storm, Hugh Jackman as Wolverine, Patrick Stewart as Professor Xavier, Ian McKellen as Magneto, Anna Paquin as Rogue, James Marsden as Cyclops, Shawn Ashmore as Iceman, and Rebecca Romijn as Mystique. And of course there is plenty more where that came from. Kelsey Grammer is introduced as Beast a furry blue mutant who serves in The Department of Mutant Affairs. At the end of the second film, Famke Jensen’s character Jean Grey was supposedly killed, however all the fans knew she was going to come back. And she does. And boy does she EVER. Probably one of the most interesting parts of the film, besides the whole mutant cure, was Jean Grey. Watching a character go from being good for two films and then turning evil is probably one of the most fascinating aspects a film like this can have. What is really surprising is what actually happens to some of the characters we’ve come to like so much in these films. Like I said fans will either rejoice or run away. And of course the standout is always the magnificent Ian McKellen who always adds the correct amount of flavor to a film. His evil, human-hating Magneto is a wonderful portrayal of a man sick and tired of what society wants him to be. And he can crush cars the like the best of them.

As exciting as some parts were, I couldn’t help feeling disappointed during the film. The introduction of a new character was handled awkwardly. The part of Angel (Six Feet Under’s Ben Foster) was basically a cameo. As the son of the man who invented the cure for the x-gene he serves as a plot device rather than a character. The poor guy gets about three lines, and I was left thinking what’s the point? Perhaps they should have canned him and used the money he got paid to improve anything else on the film. If this character was hardly going to be given a part, why was an entire flashback featuring him even used? I was also left underwhelmed by the film’s look. There was nothing really visually exciting, the action seemed rather run of the mill and the effects were just sort of adequate. Come on, this is supposed to be X-Men 3! We’re supposed to be blown away! I can’t help but feel the filmmakers thought this was going direct to video or something. It just didn’t have too much punch. And a certain character’s “exit” is unexplained, unsatisfying and altogether irritating.

The Last Stand is entertaining and has some interesting ideas, but unlike the previous two films, I couldn’t help feeling that things here were just by the numbers. This film failed to reach the emotional depth the other films. This is a summer action movie that supposedly wants to deal with important social issues but decides to dumb itself down for the sake of being a summer action movie. While I’m not exactly a raging fan of the X-Men films to begin with, perhaps I’m not the best judge. For light summer adventure, you could do a lot worse than the third X-Men film. GRADE: B-
Posted by Chris at 10:34 PM

Very best site. Keep working. Will return in the near future.
»