Fight Club: If Watching a Bickering Couple is Your Idea of a Good Time, Then See “The Break-Up” 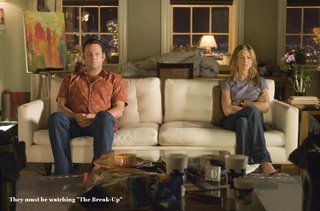 The Break-Up is a relationship movie without the relationship. Brooke (a likable Jennifer Aniston) and Gary (an unlikable Vince Vaughn) were supposedly an in-love couple according to the opening credit sequence. We see a montage of their happiness. And then the film begins and they’re on the verge of breaking up. Instead of wittily skewering modern relationships, that have been done in more successful films such as Annie Hall or When Harry Met Sally…, director Peyton Reed shows this annoyingly mismatched couple duking it out the whole time. However, it never gets dark or twisted like War of the Roses for instance. The only things the film was missing were a boxing ring and the title Million Dollar Baby.

Astonishingly, Aniston’s portrayal of Brooke is charming, natural and enjoyable. She must be the good guy. However, Vaughn’s portrayal of Gary is uncharming, natural (I believe there are pricks out there just like him) and unenjoyable. He must be the bad guy. With a movie with a plot about a couple’s split, we’re going to have to root for one of them. It’s sad to think there are men out there that actually sit there playing video games while their girlfriend just wants a little help cleaning up. Gary isn’t just an immature 30 year old; he’s an immature 10 year old. His character is so vicious, dimwitted and foolish that Brooke seems just as dimwitted for wanting their relationship to continue. Of course she wants him to change, and he’s unaware that he even needs to change.

The film is mostly made up of bickering fight scenes, most of which end on an extremely sour note, especially for a film that’s supposed to be a comedy, and interspersed scenes with supporting characters giving advice. There’s a subplot about Brooke’s brother’s questioned sexuality that ends with him kicking the crap out of Gary. The only delight in this is seeing how happy Brooke is to see Gary suffer at the hands of such a supposed sissy. Gary’s family isn’t all that normal either. One brother is a sex fiend who seems more related to Stifler from American Pie than to Gary. And Gary’s older brother played by Vincent D’Onofrio is tender yet needless. The three brothers own a sightseeing business in Chicago. The most amusing scenes involve the female driver who makes funny faces as she peels away in her double-decker bus.

Brooke’s friends include her strange, effeminate co-worker played by Justin Long whose character is borderline offensively cliché, but he seems to be having an enjoyable time. Brooke’s high maintenance, whacked out boss played by a stiff yet loose Judy Davis is probably the best character in the film. Perhaps a sequel would feature her instead of Brooke and Gary. Brooke confides in her friends played by A Christmas Story’s Peter Billingsley (who also co-produced) and Joey Lauren Adams. Unfortunately the usually reliable Jason Bateman isn’t given much to do here as a supportive friend and their realtor. They all bowl together and play Pictionary. We get to see what Brooke and Gary’s lives used to be like. But we don’t really care enough about them to even want them to get back together. Which is why the ending is actually pretty satisfying.

The Break-Up has some enjoyable moments and a laugh here and there. But Vince Vaughn’s character is just so unpleasant that I couldn’t wait for Aniston to either get the hell out of there or shoot him in the head. Had the film been a little darker perhaps that would have been an option. I enjoyed a nod to I’m-mad-as-hell-and-I’m-not-going-to-take-it-anymore singer Alanis Morissette. Brooke appropriately blasts You Oughta Know as she throws Gary’s clothes all over the place. Overall, the film isn’t very smart, has nothing really new to say and is very run of the mill. I was sort of waiting for Ann-Margaret (who makes an appearance as Aniston’s mother) to liven things up and roll around in baked beans, but alas it didn’t happen. GRADE: C-
Posted by Chris at 12:08 AM

Read some of your reviews, I'm enjoying them - keep it up!

Anonymous said...
This comment has been removed by a blog administrator.
7:58 AM

I like the helpful information you provide in your articles.
I will bookmark your weblog and check again here frequently.
I'm quite certain I'll learn plenty of new stuff right here!
Good luck for the next!

Feel free to surf to my weblog :: Inverter Fuji