Shock Treatment: Al Gore Proves We Need To Heal the World in “An Inconvenient Truth” 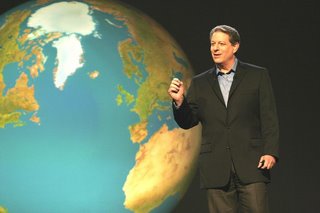 Perhaps it was a good thing that Al Gore lost the 2000 election to George W. Bush. Don’t look at me like I’m nuts or anything, but after you see the terrific documentary An Inconvenient Truth it seems that Gore’s loss is actually his win. He had dedicated a good portion of his life to showing as many people a slideshow about an issue that affects everyone: global warming.

This thought-provoking and moving film, part lecture by Al Gore (it sounds more thrilling than it is) and part insight into what makes a man who cares about the environment tick, “Truth” refuses to be a one sided argument about the inevitable future of our planet. If it actually were just an argument, he would win by a landside, unlike his unfortunate loss in 2000. Gore refuses to use his political status to convince us our future is going to be filled with doom and gloom and if we don’t elect him our leader, we’re all gonna die. He has moved past the fact that he’ll probably never be our president. He cares more about showing what could happen if we all continue to live our lives the way we do.

Those ready to write off the film as some liberal, environmental nonsense is in for a surprise. Gore refuses to take a manipulative stand that many see in filmmaker Michael Moore. Moore’s films, while expertly made, continue to divide people in terms of the controversial issues he presents. However, we never get to see what makes Moore tick. Why does he feel the way he does? He refuses to let people who think he’s nuts in on his point of view. In Gore’s film (which was directed by Davis Guggenheim) he preaches to everyone. For instance, he calls this important, needed environmental change more of a moral issue rather than just a political issue. Hmmm, a moral issue? That seems like something a conservative would say. And if one conservative could see this problem as a moral one, that would be one step in the right direction. Many who believe global warming doesn’t exist or that “we get what we paid for” or we can solve the problem when we get there, will undoubtedly be slightly convinced that we have to AT LEAST begin to all agree that we’re not headed in a very good direction.

There are two stories here: that of Mr. Gore merrily giving his infamous global warming slideshow to a packed audience and interspersed insights into the politician’s life. We see Gore as a normal guy, experiencing human tragedy (the near death of his son and his sister dying of lung cancer). We get the idea that he’s simply a man who cares. We can see that he’s a passionate man who enjoys life. So why would we want to continue to live the way we do (I’ll get to that in a minute) and see our planet just waste away beneath our feet? Gore’s slideshow is filled with scientific fact that would be hard to argue against. His graphs and charts and timelines are frightening.

So what exactly is causing global warming in the first place? Two words: carbon dioxide. Everyone breathes out CO2. But within the past century it’s the emissions of CO2 from our cars and other heavy machineries that are polluting our atmosphere. This over abundance of CO2 acts like an insulator, causing the global temperature to rise. This causes icecaps to melt, letting fresh, cold water into the oceans, which in turn causes ocean currents to change, which can cause more violent weather patterns or even an ice age! (maybe The Day After Tomorrow wasn’t far off) Gore’s facts are meant to inform rather than cause a panic, although his facts are pretty scary. His images make you wonder whether there’s something you can do personally to at least halt such catastrophic events from taking place.

There’s so much more to this film, that a review can’t do it justice. Gore presents a straightforward, entertaining look at our planet’s past, present and future. Man has come such a long way and it seems so silly that we’d spend our future just killing our home. We’re obviously on a dangerous track and we need to look at things in a different way. We don’t need to give up everything we have and throw out our cars and walk everywhere, but it’s just the little things, that we can do everyday that will add up to a huge whole. An Inconvenient Truth is a convenient way to showcase a moral and global issue in an entertaining film staring a guy nobody ever thought could actually be entertaining. GRADE: A
Posted by Chris at 9:11 AM