The Devil Wears OshKosh B’Gosh: “The Omen” Remake Neither a Disaster Nor a Revelation 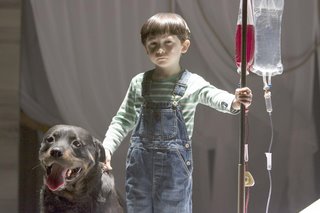 I went into the remake of The Omen with one thought in mind: don’t screw up the beheading scene. In the original 1976 religious shocker, a supporting character meets an extremely unfortunate end with a lone plane of glass. It is one of the best decapitations in all of cinema. There’s a lot at stake in a remake, but remaking The Omen certainly takes the cake. The original film is certainly not an outstanding piece of cinema; parts seem just as hokey when played today, but it is in the top of its class for its genre.

Many people know its story, yet many don’t. A couple (Mr. Thorn is an American ambassador in England and Mrs. Thorn is a housewife) gives birth to a child, but the child dies. Mr. Thorn, without telling his wife, decides to substitute another newborn and raise it as their own. Everything’s fine right? The only problem is that the child is the son of the Devil! D’oh! If it sounds ridiculous that’s because it is. The new film doesn’t necessarily improve on the original (in some aspects it does slightly) and is really no worse than the original. I give most credit to original screenwriter David Seltzer who revisits his own screenplay and adds some modern twists. New director John Moore manages a modicum of suspenseful creepiness and at least one jump scare that nearly caused me to wet myself.

Let’s discuss what was good about this new vision. First of all, in this day and age everything is CGI, CGI, CGI. Did this film use CGI? Yes. Did it gorge itself in supposedly scary CGI creations such as ghosts, spirits and monsters? No. Thank God for that one. See the new Amityville Horror or The Fog if you want to overdose on unscary CGI effects. Thankfully whatever scary apparitions do appear, they come in dreams, where that stuff is ok. Remember I said I almost wet myself? Kudos for that one. Any film that startles me that much I have to commend greatly. I liked how the film was extremely similar to the original, but it was never in a copycat sort of way. I felt it was more a homage to the first film rather than flat out copyright infringement. In the original film, one scene has a goldfish bowl topple over a balcony. We get a long shot as it takes its time falling to the ground. In that one shot we sense how far that fall really is, and what could happen if a person were to tumble over the side. (hint hint) We get a similar image here with a flower vase and I enjoyed it. The beheading I mentioned earlier is also a standout if not completely better than the original. I hate to always compare to the original, but this film’s beheading is certainly a gross and enjoyable decapitation. Aren’t they always?

Probably the best aspect of the new film is Mia Farrow’s triumphant return to horror as the seemingly nice nanny Mrs. Baylock. In the original film the nanny is sweet, but obviously has other motives. Like protecting the spawn of Satan! Here Farrow is way too nice and only a glimpse of evil makes her all the more disturbing. Here it’s as if she’s resurrected her Rosemary’s Baby character for a sequel. If this film were REALLY good, this could be an Oscar worthy performance. A scary scene later involving her and Mrs. Thorn is disturbing and Farrow really sells it.

So what’s so bad about this new Omen? First of all the leads didn’t really do it for me. Julia Stiles, as Mrs. Thorn, seems way too young to be the mother and wife to an ambassador. Her acting isn’t really terrible, but it’s not very good. Liev Schreiber is better, but not altogether convincing as well. This is a pivotal role. We have to seem him grieve for his dead child, get it together, and pretend like this new baby is his own. He has to go through many stages of grief and horrible situations and I’m not so sure he was completely successful in emoting everything. Also, in the third act of the film, as he and his photographer friend go looking for Damien’s origins, it gets rather silly and better left to something like The Da Vinci Code. The original was like that as well, so the apple obviously didn’t fall far from the tree. Also, as the young son Damien, Seamus Davey-Fitzpatrick isn’t all that creepy. He seems to be TRYING to act creepy, the boy from the original film was much more subtle. Also, Jerry Goldsmith’s similarly creepy and beautiful Oscar-winning score has been replaced by more mundane music by Marco Beltrami.

Lastly, at the film’s start a priest gives a slideshow presenting real life tragedies as omens of evil. To quote that guy from the movie Clue, “The Armageddon is at hand!” We get glimpses of the Twin Towers burning, hurricanes, the tsunami etc. What could seem like exploitation is actually handled well. These images don’t really seem out of place. I commend the filmmakers for using these images freely as artistic expression to show that there is a lot of tragedy in the world and that lately we’ve all been overdosing on horrific events. This was an interesting addition to say the least, which set up a foreboding atmosphere that worked well for the film as a whole.

The Omen is an entertaining and creepy movie that does justice to the original. It really doesn’t seem like a cash grab (they released it on 6/6/06 if that’s any indication) and anyone who sees it, whether a fan of the original or not, is bound to enjoy something about it. GRADE: B
Posted by Chris at 8:08 PM

of course like your web-site however you need to check the spelling on quite a few of your posts.
Several of them are rife with spelling problems and I find it
very bothersome to tell the truth on the other hand I will surely come again again.

Feel free to surf to my webpage :: onlinecasinos.us.org