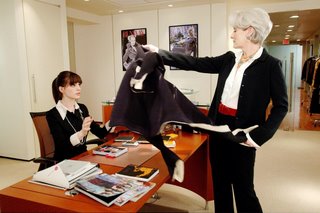 Everyone has someone they don’t like. And most of those people have had a boss they didn’t like. Just an annoying, pushy and selfish boss who never thinks of your needs, only their own. Of course perhaps this is only people who work in the entertainment industry. And if the situation in the film The Devil Wears Prada, directed by David Frankel, is any indication, it’s that every magazine editor-in-chief is an evil bitch. Having said that, seasoned actress Meryl Streep has never been better than she is here as: an evil bitch. She’s the kind of devilish woman that you love to hate because she’s a fully realized character. And you simply get so much pleasure in watching others squirm around in her presence. What a sadist if there ever was one. The one we get to see squirm the most is Anne Hathaway as Andy who takes a job as an assistant to Miranda Priestly (Streep). She’s the editor-in-chief of the fictitious splashy fashion magazine Runway (think Vogue). Oh what a sadistically entertaining time to be had here!

Streep is marvelous in her role as the epitome of pure evil and yet we love her even though she’s such a demanding and self-centered woman. As her new assistant we like Andy simply because we like seeing her sweat around Miranda’s extremely high demands. When one of her orders is to have Andy get a copy of J.K. Rowling’s latest Harry Potter manuscript for her kids, the film could have easily been titled Mission: Impossible IV. So it’s demand after demand after demand. Andy walks Miranda’s dog, picks up her dry cleaning, gets famous designers on the phone at the touch of button, gets piping hot lattes, takes notes and certainly a lot of lip; yet we only want to see her succeed in this ridiculously anxiety-ridden atmosphere.

So why doesn’t Andy just quit this job, which we learn right from the beginning, that she doesn’t really want in the first place. (It’s also a job, we learn, a million other girls would kill for) Well Andy is recently graduated and unbelievably living in Manhattan with her boyfriend Nate (Entourage’s Adrian Grenier). She wants to be a journalist when she grows up and a year as Miranda’s assistant would open many doors for a successful future. She figures any torture now would be well worth it for the dream job of her choice.

So frumpy Andy takes the job in which she must share with Miranda’s OTHER assistant Emily (a splendid Emily Blunt, who I’ve never heard of). Andy is the “2nd” assistant, while Emily is Miranda’s right hand gal. Although wouldn’t you know Andy begins dressing in designer digs and becomes the best assistant ever. This journey is truly fun and enjoyable to witness. Andy’s quips with Emily are fantastic as are her altercations with Miranda’s ludicrous requests. Every demand ends with a rude brush-off and a simple “that’s all.” And during all of this the witty script (penned by Aline Brosh McKenna) is simultaneously ripping the fashion industry a new one. I know next to nothing about fashion or modeling, but when jokes are made about Emily’s “diet” of eating nothing for a week, it’s devilishly satisfying.

If there’s anything wrong here it’s the introduction of Christian Thomas (Simon Baker), a book editor who Andy meets and helps her out with one of Miranda’s impossible missions. They obviously have some kind of spark (or at least the screenplay thinks so) and since Andy’s job strain has also been straining her relationship with Nate (and her friends), you can guess where’s this is going. It doesn’t play out too typically, and it doesn’t ruin the film by any means, but it was an unwanted, clichéd obstacle.

The Devil Wears Prada is sadism at it’s best. Streep is simply smashing here. She appropriately steals every scene with her brutish attitude. Every look and nuance is perfect. She delivers her lines with such bravado; it should be studied in acting classes around the world. Andy’s journey is entertaining; her altercations with her co-workers are satisfyingly enjoyable. Although the new romance’s introduction was slightly tiresome it didn’t really sink the film. The Devil Wears Prada is a delightfully wicked time, now that’s all. GRADE: B+
Posted by Chris at 10:51 PM

Very good blog post. I definitely love this site.
Keep it up!

Hello, all the time i used to check blog posts here early in the morning, because
i enjoy to find out more and more.