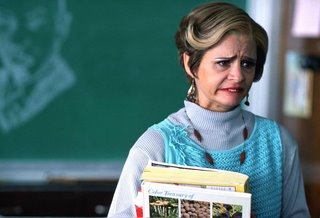 If you’ve never watched the slightly cult hit Comedy Central show that lasted for about three short seasons you’re certainly in for a surprise with Strangers with Candy. Apparently, the film is a prequel to the series about a 43 year-old woman who after spending some time in prison for drugs, prostitution (you name it) is finally paroled and promises to turn her odd life around for her dying father. What a bizarre character, in an even more bizarre world. It’s a world where teachers have a bar in the faculty lounge, male teachers fall in love, science class is taught from the Bible, and a 43 year-old former junkie who looks like a she spent too much time getting her make-up applied by a blind person at Wal-Mart, can go back to high school to make things right in her life. Where a man in a coma can be in several locations, including a science fair, unconsciously cheering on his ex-hooker daughter. Louis Armstrong sang it best: “what a wonderful world.”

If any of this sounds like a fun time to you, then you’ll most likely enjoy Strangers with Candy. It stars Amy Sedaris in the lead role as Jerri Blank. Like I said earlier, this is based on the cable TV show. The film, I read, is supposed to be sort of prequel to the TV series, as it shows why and how Jerri gets out of prison and is determined to turn her life into something slightly meaningful. Of course she’s still rude and crude, stopping occasionally to feel up her best girl friend, ogle the class hunk and stab her brother with a fork. The thin plot (this IS of course a TV sitcom stretched to feature film length) revolves around Jerri’s attempt to make a good name for herself by winning the science fair at school. Here she befriends some teens Megawatti and Maria. The latter being a beautiful red head, who upon first sight Jerri asks whether her drapes match the carpet.

Jerri Blank is one amazingly twisted character, a whacked out woman who those on SNL only wish they could have dreamt up. Sedaris seems to be channeling bits of Cheri Oteri, Molly Shannon and Amy Pohler and she does it darn well. The plot is predictably weak, as is the case with most films like this, but what it lacks in plot it makes up for with huge laughs. The mere sight of nude butch prison gals bullying our hero in the shower made my stomach hurt from laughter. Like the equally strange (yet a million times dirtier) Napoleon Dynamite, just the mere sight of our main character creates chuckles. The dialogue is funny and extremely raunchy with dirty words you wouldn’t want your parents hear you say nor would want to hear them say. The film goes so far with out going overboard. Jerri’s altercations with her younger brother (who is captain of the JV squatting team, whatever that is) are inspired.

And of course there are the other whacked out supporting players who help light up the screen. We get cameos from people like Philip Seymour Hoffman, Allison Janney, Sarah Jessica Parker, Kristen Johnston, Ian Holm, and in a larger role Matthew Broderick who all really have no business being in a gross-out movie like this, but are all the better for it. Their roles are all short but sweet. And lest we forget the Strangers with Candy alums including Stephen Colbert as Mr. Noblet, who instructs from the Holy Bible and makes his students turn to the back of the room when he’s feeling emotionally stressed and Paul Dinello (who also directed) as his secret art teacher lover Geoffrey. And of course Greg Hollimon, who recites his lines as if he were auditioning for a play in high school, as Principle Blackman. You, guessed it, he’s a black man. It’s that kind of movie.

If you’re in the mood for a wacky movie, with bizarre characters, funny moments and extremely tastefully distasteful humor, Strangers with Candy is your ticket. I must stay that it was certainly an enjoyable if not terribly rewarding movie experience. Kudos to Sedaris, she just may be the mother of vulgarity. GRADE: B
Posted by Chris at 9:22 AM

I think this is an informative post and it is very useful and knowledgeable. therefore, I would like to thank you for the efforts you have made in writing this article. confidentialmodels.com/