Love & Death: Woody Allen Serves Up “Scoop” and Gets Everything Right 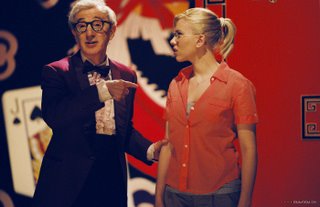 Woody Allen certainly is on a roll. Last year’s Match Point was a tremendously entertaining drama about murder and lust. And now we have this year’s Scoop, which in a way is about the same things, except done with Allen’s trademark comic flair. First of all, if you’re a true Woody Allen fan you’re going to enjoy Scoop. You may not love it, it may not be your favorite, but if Allen’s comedic taste is the same as yours, you’re bound to have a good time. What of non-Allen fans? There are other aspects to enjoy, such as actors Scarlett Johansson and Hugh Jackman. Allen seems to have gone back to some of his older films put some parts in a blender and poof he got Scoop. Those who are sick of Allen’s nervous ramblings, one-liners, and jokes about being Jewish are likely to be tired of this mishmash of Woody-isms. I, however, loved it.

We start off with the death of a journalist in England. Joe (Ian McShane) is now a spirit on a ship being steered to the underworld by none other than Death himself. He learns from one of the other dead passengers that she was poisoned by a British aristocrat who she believes to be a serial killer presently making his way through England. Enter Woody Allen as Sid Waterman, a stage magician and his lucky audience participant Sondra Pranksy (Johansson). Sondra is an American journalism student and while being “dematerialized” during Sid’s act, Joe “materializes” and gives her the biggest scoop of the decade: Peter Lyman (Hackman) the son of a rich businessman is the Tarot Card serial killer. This leads to Sondra and Sid reluctantly teaming up to get proof that Peter is the killer.

This leads to funny situation after funny situation along with Allen’s trademark shtick, which nearly 30 years after Annie Hall seems just as funny. Like Sid would say, Allen is a credit to his race and I mean that out of all due respect. Sid poses as Sondra’s father, which adds tremendous comedy, as he’s supposed to also be a rich business man into gold, silver and digging for oil. He’s also pretty good at entertaining fellow debutants at rich parties held by Peter with his card tricks and one-liners. Of course Peter becomes infatuated with Sondra. There are plenty of suspenseful snooping around scenes as Sondra and Sid look for clues. Many scenes here are reminiscent of Manhattan Murder Mystery (one of my favorites) or The Curse of the Jade Scorpion. And again it’s obvious with the story and the situations that Allen is obsessed with death as ever. He uses existentialistic situations (the appearance of James as a ghost, and the Grim Reaper) to contrast the love story between Peter and Sondra.

Allen delivers a terrific, lightweight comedy yet again. The actors do a great job of portraying realistic people (although it seems bizarre at first that Sondra and Sid would really team up and spend so much time together seeing as they hardly know one another) who do realistic things, in a rather unrealistic situation. Allen has great timing and a sensational ear for humorous dialogue (he tells Sondra that he’d like to take her out for a fancy birthday dinner and asks her if she’s a fan of the McNugget) and although some would say he’s just recycling his older material, I say does it really matter? If you enjoy Woody Allen there’s little to complain about here. GRADE: A-