Breaking Up is Hard to Do: “My Super Ex-Girlfriend” is Entertaining Fluff 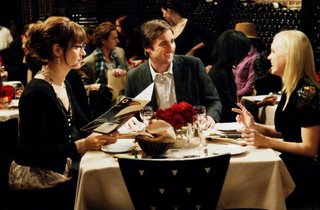 I was sort of hoping to see Anna Faris fly through the sky, a trail of dust in her swift wake. I was patient and I got what I wished for. Hopefully that didn’t ruin any surprise for you involving My Super Ex-Girlfriend, but on a slightly positive note, it’s a movie that gets better (even if it gets caught up in loopy plot contrivances) as it goes along. This is a movie that can’t really be taken too seriously and if you do, you’re bound to have just a mediocre time. However, if you’re willing to make sense of all the nonsense perhaps you’ll find yourself having a fairly super time. In the vein of director Ivan Reitman’s film Ghostbusters, this is a fantastical, high-concept comedy. As a send-up of either superhero films or romantic comedies it doesn’t really deliver anything too insightful but it’s a fun and playful film that tends to hit as many marks as it misses.

Like the recent You, Me & Dupree, (along with starring a Wilson brother, this time Luke) My Super Ex-Girlfriend is a formula film that relies on the contrived “ideas” and characterizations brought upon by its script. Characters act the way the script wants them to act, not because these are real people with true motivations. Point being, Matt is an ordinary guy (and by ordinary I mean he isn’t really well written) who has trouble finding the right woman. His unhelpful, womanizing friend is Vaughn, gamely played by Rainn Wilson. I know him from Six Feet Under, but you may know from TV’s The Office. Matt approaches a woman on the subway train nearly by random. There doesn’t seem to be anything special about her, except that she’s chosen by the script. She basically blows him off, until some jerk snatches her purse and Matt heroically chases the guy. Since this woman, with the appropriately alliterated name Jenny Johnson, (Uma Thurman) just so happens to be the city’s only active female superhero, she’s accepts a date on behalf of Matt’s attempt to do something good for her.

It isn’t long before Matt comes to find out there’s something peculiar about his new flame. Yes she’s controlling, jealous and manipulative as women tend to be in these films, but she also has superpowers and Matt just can’t deal. So he breaks up with her. Big mistake on his part because Jenny becomes extremely P.O.ed and uses nearly every superpower in her body to cause him misery. Jenny is introduced as a fun woman: funny, charming with a knack of selflessness that I enjoyed. Of course as soon as the relationship turns ugly so does she and we’re forced to choose sides. Do we empathize with Matt or Jenny? Frankly I’d have to empathize with Jenny otherwise she’d kick my ass. They also introduce Professor Badlam (Eddie Izzard) as the super arch nemesis. This is where the film runs into some trouble. At times you don’t know who are the good guys and who are the bad guys and I don’t really think the screenwriter knows either but I digress. Just go with it.

It’s hard to believe that these two are really in love and it seems just crazy that Jenny would get so ticked off. She’s insecure yes, but that’s really just her alter ego. As G-Girl (a superhero name that I’m guessing was given to her so that they could squeeze in a G-Spot joke) she’s powerful and pushover for anyone. It seems silly she’d go out of her way to throw live sharks at Matt, hurl his car into orbit around the Earth and boil his goldfish alive with her heat vision. But of course for the film, as a comedy, it just seems to make sense. Which is why to get any fun out of this you must sit back relax and like I said before, just go with it.

There’s genuine attempt to give a backstory, but let’s face it; this isn’t Spiderman or Batman. This is simply a gimmicky twist on the whole romantic comedy. It’s a romantic comedy on steroids if you will, with none of the wit or psychological insight into relationships or dating, but in the end does it even really matter? There’s plenty to enjoy here and the film sort of has a wink wink, nudge nudge quality that I liked. Take for instance the scene in which Jenny refuses to stop a missile heading for the city because she doesn’t want to leave Matt alone with another woman. I laughed a lot. The supporting cast is decent if not altogether fully utilized. Wanda Sykes, as Matt’s boss, is here for a couple of scenes but thank God for Anna Faris. As much as I enjoyed Thurman, I would of loved to see Faris as the Super Ex-Girlfriend and if you’d like to too, just keep watching. It’s a movie that gets better as it goes along. In the battle of the Wilson brothers comedies My Super Ex-Girlfriend certainly flies circles around that loser Dupree. GRADE: B-
Posted by Chris at 10:38 PM