Movie to Drown By: “Lady in the Water” is a Waterlogged Mess 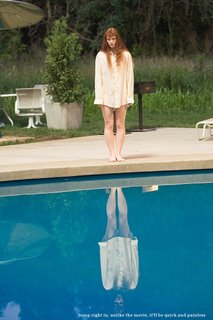 I have never had such an insulting and tedious time at the movies. In fact I was so insulted by the once great M. Night Shyamalan (who egoistically and unnecessarily gives himself a large role) that I was tempted to give a review that simply said “this movie sucks” but I’m too above that. This film should come with a disclaimer for anyone having suicidal tendencies. Had there been a pool nearby I might have jumped in without coming up for air.

Lady in the Water is a grave miscalculation. Nearly every character is annoying. Oscar-nominee Paul Giamatti has an annoying stuttering problem that seemed insulting to stutterers all over the world. Bryce Dallas Howard gave E.T. a run for his money in the skinny and pale “from another world” department. The character might have been better played by a puppet. The rest of the characters are residents of an apartment building. We get a group of stoners, some Hispanic sisters, a man and son who enjoy puzzles, and the new guy who’s a stubbornly pompous film critic who is supposedly a slap in the face to all those that hated The Village. As if to add insult to injury Shyamalan gives us some of the most fake looking CGI monsters I’ve ever seen. The animated wolves in The Day After Tomorrow were scarier. I can’t believe the man who gave us the brilliant The Sixth Sense made this piece of whimsical garbage.

So why does this film suck so much? This is supposed to be a fairy tale/bedtime story taking place in the “real world.” This is the most unrealistic real world I’ve seen. Paul Giamatti as the building’s superintendent slips in the pool and magically wakes up later in his bed. Was it a dream? No! He was saved by a sea nymph (Howard) who lives in a world just beyond the swimming pool. He doesn’t seem to think that a sea nymph living in his pool is a strange thing. And then there’s the insulting Asian mother/daughter team. The mother is a wise, old lady who knows of the bedtime story that is boringly unfolding before us. This woman knows everything, and rambles on and on in unfunny scenes about what the purpose of the sea nymph is and why she shows herself to the people who live on land. And then there’s something about grass monsters, and mirrors, and looking into their eyes, and guardians, and an interpreter (I needed one to understand what the heck was the point of all this) and a CGI eagle. Oh and then there’s the stupid tree monkey things. Is any of this making any sense? Where’s Robert Langdon when you need him?

Had this story been present in a Harry Potter film, I'd be slightly willing to believe it. This film's story is unbelievable and hardly interesting in the slightest. No wonder Shyamalan told this story to his kids at bedtime. I'm sure they were out like a light. I have to quote Roger Ebert when I say, “I hated, hated, hated, hated, hated this movie.” (That comes from his scathing review of Rob Reiner’s “North”) Luckily, Mr. Thumbs is in the hospital recovering from surgery and he won’t be able to review this stinker. In fact, I wish I could have avoided it myself.

Who would have thought that M. Night “Surprise Ending” Shyamalan has given us his biggest twist yet: one of the worst films in recent memory. I’m looking forward to Snakes on a Plane more each and every day.

NOTE: I actually enjoyed James Newton Howard’s score for the film. Nice job. If anything, I’d much rather stare at a blank wall and listen to the soundtrack then have anything else to do with this retched motion picture. GRADE: F
Posted by Chris at 11:41 PM