Holdin’ Out For a Hero: “Superman Returns” to the Big Screen Triumphantly 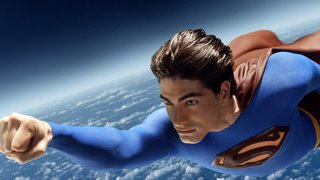 I promise not to make spandex jokes or puns revolving around “It’s a bird” or “It’s a plane.” Of course that didn’t stop the makers of the newest Superman film. Set up as more of a sequel than a remake, Superman Returns’ story is supposed to take place 5 years after 1980’s Superman II. However, Metropolis residents are strikingly un-80s and there’s nary a flock of seagulls in sight. Writers Michael Dougherty and Dan Harris and director Bryan Singer have wisely chosen to forgo the rest of the Superman episodes, much like Halloween H20 decided to pick up after Halloween II. (Why the strange reference? Well like Lois’ new flame Richard White, I too enjoy horror films)

So how does a Superman film hold up in this world where Spiderman rules the box office records, X-Men can stand in for homosexuals, and Batman’s psychological journey began just last summer? Pretty darn well if you ask me. Even though some could argue he’s the best and most iconic superhero, Superman himself isn’t exactly all that interesting, but he sure makes one heck of a fun movie.

The first X-Men film really got me into the whole superhero craze that has been going on for the past 6 years. Although it really started for me with Batman way back in 1989. But let’s face it, that movie was more about the villain (a campy, yet classic Jack Nicholson as Joker) than about the hero. Then you’ve got Spiderman. What a fun, thrilling and exciting movie! And that sequel! It was better than the first! I wanted to BE Spiderman and I was 19 at the time. But I’m getting off of the main topic here: Superman. This new film is exciting and fun, and although slightly slow to start, is more and more engaging as it chugs merrily along. The one awkward part is that once Superman and his alter ego, the bumbling, nerdy Clark Kent are introduced that’s pretty much it to his character. He has some backstory about falling in love with Lois Lane who’s now romantically involved with fellow reporter and pilot Richard White (James Marsden).

So who is this new Man of Steel? That would be newcomer Brandon Routh, who just may make blue tights the latest fashion trend. He has a strong sense of mystique and wonder that is perfect for the role. His fresh face purposely makes us believe his is Superman. Otherwise we’d be like oh look it’s Paul Walker (one of the former supposed candidates) as Superman! Kate Bosworth who I found charming in Win a Date with Tad Hamilton! is also just as charming here as Pulitzer Prize-winning reporter Lois Lane. She’s accompanied by her 5-year-old son. And wouldn’t you know that Superman had been gone for 5 years as well. Oh what gossipy possibilities! Kevin Spacey plays the role of arch nemesis Lex Luthor. His performance like that of Nicholson as Joker is campy and over the top. Although it’s difficult to see his true reason for despising Superman even though he put him away in prison for a long time. Parker Posey is a standout (as usual) as Luther’s fellow alliterate-named companion Kitty Kowalski who’s constantly clutching her cute little dog. Luckily another familiar character shows up: John William’s iconic Superman theme.

The film as a whole is epic in scale, has good effects, is charming, entertaining and appropriately silly yet serious. However, one can feel that for some reason an extra push would have seemed beneficial overall. Everyone does a great job with what they’re supposed to do, but you can’t help but feel that there’s just something missing. The supposed backstory seems missing since this is supposedly a sequel. Yet this seems more like a "reimagining" more than anything. Singer seems to be missing part of the social and psychological depth he brought to the X-Men films. There really isn’t as much depth involving what it’s really like to go from Superman to Clark Kent about fifty times a day. If you want conflicted heroes watch Spiderman. If you want social commentary with your CGI thrills see X-Men. If you want superhero costumes with nipples watch Batman & Robin. Superman Returns, however, remains an appealing, entertaining blockbuster that just may really make you think that a man can fly. GRADE: A-
Posted by Chris at 10:24 PM

Mont Blanc, also famous for its pen and accessories is a must visit. This is the only such boutique in replica watches or this region besides its Singapore branch. The famous rolex replica sale originated form Sonvilier, in the Swiss Jura or better known as Chopard is also situated next to these stores. I wonder if Chopard Mille Miglia Classic, my personal favourite of replica watches sale was on display. I did not have much time at that particular hour to replica watches into all these boutique. It will be included in my next visit. But from what i see on the window display, the offer was more towards catering ladies watches segment. In the rolex replica also there is this Watatime boutique where you can find most of the authentic watches such as Omega, Ebel and Longines watches which has high market demand. The fake rolex sale is also situated near these luxury boutique but on a different floor.