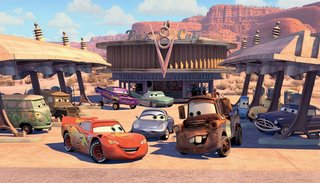 The worst thing about Disney and Pixar’s latest collaboration is its title! I think it would win runner up to August’s already cult thriller “Snakes on a Plane” for Most Obvious Title of the Year. I mean come on! Oh what did you go see? Cars. Oh wow, what’s that about? Cars. Ohhh…wow… It's more exciting than you'd think. I guess “Cars That Talk” would just have been lamer. If you can get past the evident title, this wonderful animated adventure is the one of the BEST films ever to be branded with the Pixar seal of approval. (Finding Nemo is still my personal fave) Forgive me for saying I enjoyed this film much more than The Incredibles. The writing is witty, the animation is simply astonishing, the characters are warm and fuzzy, and the story is simply fun. You can’t get a better comedic family adventure so far this year. Ok ok, enough praise, why is this flick so amazingly good?

Since it’s a cartoon, let’s discuss the visual feast that is Cars. This is the best-looking CG animated film to date. It just has to be. The colors and vibrancy of Finding Nemo is certainly remarkable as well but the realistic, yet cartoon-like animation used here is just stunning. Remember when I said I wanted to reach out and squeeze that turtle’s head in Over the Hedge? I wanted to do the same thing here. The surfaces and textures in Cars were just sensational. The mirror-like reflections on the vehicles were marvelous. There aren’t enough adjectives in the world to give the film’s look justice. The visuals are balanced with an appropriately vibrant soundtrack with Randy Newman’s whimsical score and singers Sheryl Crow, John Mayer, James Taylor and more lending their talented voices with memorable songs.

The film stars the voice of Owen Wilson as a cocky and famous rookie racecar Lightning McQueen. This brash racecar lives his life in the fast lane, literally. He has just come in a three-way tie with two other just as cocky racecars (Michael Keaton and real-life racer Richard Petty). And in one week’s time the three will duke it out to see who will win the Piston Cup. (NASCAR fans take note) These opening scenes are filled with zooms and quick zips that are sure to give the FOX network's camermen a run for their money. Those not into the whole NASCAR thing will be glad to note that the film takes a long pit stop away from the racing scene. On his trek to California where the race is going to be held, complications arise and McQueen is accidentally left behind in a desert town called Radiator Springs in the middle of nowhere. Here he gets into some trouble and has to do some community service (perhaps a slight PSA to the preteen juvey crowd?) This little down-on-its-luck Pleasantville is home to a gaggle of animated automobiles ranging from cutesy Porsche Sally (Bonnie Hunt) to a hillbilly hick truck named Mater way too well voiced by none other than hillbilly hick Larry the Cable Guy.

I love that all the characters in Cars had their moments to shine. They were all charming, funny and loveable. It was as if there were ten Dorys from Finding Nemo in this movie. What I also enjoyed about these fun-loving supporting cars is that they take on the personality of the people who typically drive them. It’s no surprise that the VW van (voiced appropriately by George Carlin) is a tye-dye colored hippie or that Cheech Marin voices a bouncy Impala low-rider and Sarge is a commanding Army Jeep voiced by Paul Dooley. Tony Shalhoub voices a Ferrari obsessed Fiat who owns the local tire shop. And guess who shows up as the classic Hudson Hornet Doc Hudson: none other than classic Paul Newman, blue eyes and all. These characters are fully realized by both the actors and actresses giving their voices and the animators who superbly succeed in personifying these mechanical vehicles into fully realized lifelike characters. The cars' windshields become expressive eyes, their grills being wacky lips and mouths, teeth, tongues and all.

The story is entertaining and while it takes a slight sentimental turn towards the end as these films tend to do, it didn’t bother me. It is telling an enjoyable, funny story (written by LOTS of Pixar writers) with engaging characters. And it’s surprisingly moving when McQueen learns to slow down and take a look at the big picture. And who knew two cars falling for each other could be so poignant? There’s stuff for kids and adults and I’d be lying if I said the film, as a whole didn’t move me. I’ll certainly never look at cars the same way again. I never knew cars could have such spectacularly realized personalities.

You’d be doing yourself a favor by getting in the nearest vehicle and getting to the theater to see Cars. It's worth the high gas prices. Forgive the studio for it’s plain name because this vibrant adventure is exciting and hardly in need of a tune-up. GRADE: A
Posted by Chris at 6:08 PM

Hey there just wanted to give you a quick heads up and let you know a few of the images aren't
loading properly. I'm not sure why but I think its a linking issue.
I've tried it in two different internet browsers and both show the
same outcome.

Check out my web-site - all the Cheats

I used to be able to find good info from your blog posts.

Great post yet I was thinking about whether you could compose a litte more on this subject? I"d be exceptionally grateful in the event that you could expound a tad bit further. Value it! Windshield Replacement in Phoenix