What Do You Call a Libre That Isn’t Yours? “Nacho Libre” 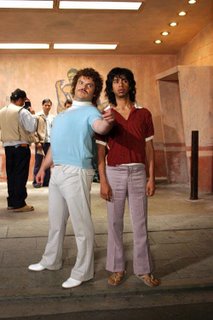 If my headline joke makes sense to you then you might enjoy the latest film from the makers of Napoleon Dynamite. Nacho Libre stars Jack Black as a half Mexican, half Scandinavian monk (he’s white like a ghost, but talks like Cheech & Chong) who works at an orphanage and spends his evening in wrestling matches so his poor kids can have decent meals. If this sounds odd, that’s because it is, in a Napoleon Dynamite sort of way. However, those who were overjoyed by the beloved characters of Napoleon, Kip, Pedro, Uncle Rico and Deb are less likely to be thrilled by Nacho, his sidekick Esqueleto (Héctor Jiménez) and the holier than thou Sister Encarnación (Ana de la Reguera). While the movie is definitely in the tackily bizarre sense that make Dynamite such a weird success, director Jared Hess can’t get too much oomph from his actors this time around. However, overall this is a mild successor to that liger lovin’ Napoleon.

It seems as though I’ve summed up an entire review of the film in one paragraph, and I think that’s true. Having said that, there’s really not much to Nacho Libre. The idea is original and altogether way out there, which I most definitely appreciate. However, there seem to be far too many lulls in the story. As Nacho, Jack Black’s shtick can’t last the entire run of the movie and the character of Esqueleto is no substitute for Pedro. My favorite character is perhaps Sister Encarnación who seems to slip into her role very nicely. Her Penelope Cruz accent is spot on and she’s a loving and caring nun who cares just as much for our hero Nacho. But do we as an audience care about him? He’s such a nice guy that of course we do. We enjoy that he “sins” by disguising himself as a masked wrestler so that he can win money to feed the orphans.

Laughs are certainly present throughout the film. Why is it that I burst out laughing both in the opening of this film and at the start of Napoleon Dynamite as well? Here we get a shot of a nun laying back in a rocking chair. Silly? Not really. Random? Of course. There’s something about her position (and it’s not even sexual) that elicits a smirk. And is there anyone who didn’t crack up when you first see actor John Heder dressed as the Dynamite character? There he is in all his jeans-tucked-in-boots-while-holding-a-Trapper-Keeper glory. Silly silly stuff. Credit director Jared Hess and writer/wife Jerusha Hess. (School of Rock writer Mike White helped out too) They have a knack of taking strange people in a strange place and making strange situations.

Nacho Libre is an original piece of fluff. It has some fun wrestling scenes for those who enjoy the sport. There are ridiculous characters and their silly obsessions (tots have been replaced here with corn-on-the-cob-on-a-stick) for those who found Napoleon and his gang irresistible. Since they’re always eating corn, it could easily be turned into a drinking game. If you’re one that enjoyed Hess’ other movie, you’re likely to enjoy this follow up. For those who found Napoleon Dynamite not your cup of tea, perhaps it’d be best to stay away from Nacho Libre. GRADE: C+
Posted by Chris at 11:03 PM

Maybe Ana de la Reguera's accent was so on because SHE'S MEXICAN...

Herbal treatment is the most effective treatment you can do

I am often to blogging and I really appreciate your site content. This content has really peaks my interest. I am going to bookmark your internet site and maintain checking for first time details. http://allbarefootrunninggenuine.com

Hello there, You’ve performed a great job. I’ll certainly digg it and personally recommend to my friends. I am sure they will be benefited from this web site. Thank you for sharing with us, I think this website really stands out. https://expert-fiscal.com