Broadcast Muse: Robert Altman’s Cast Sings From the Heart and Funnybone in “A Prairie Home Companion” 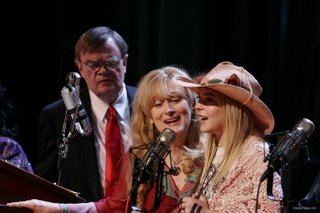 Director Robert Altman manages to make a talky movie about a folk radio show extremely interesting. Perhaps he should win an Oscar just for that feat. As usual, Altman brings together a winning cast of popular actors in his latest cinematic tryst, A Prairie Home Companion. We get actors in top form such as Kevin Kline, Meryl Streep, Lily Tomlin, Lindsay Lohan, Woody Harrelson, John C. Reilly, Virginia Madsen, Tommy Lee Jones and Saturday Night Live’s Maya Rudolph. The stage is set for a local radio show’s last night on the air. It’s amazing that the show has stayed on for as long as it has. All the performers are talented, but who would really stay home on a Saturday night and listen to them? This film makes them all extremely engaging and even has a few mystical tricks up its sleeve.

For those not in the know when it comes to Robert Altman flicks, he’s what you need to know. His films tend to be artsy, you have to think, he uses camera movement and editing carefully, and his films are comprised of many, many characters most of whom hold different conversations at once. In that case it’s your job to figure out whom you should be listening to. If you’re willing to not be just “entertained” (although Altman loves to do that) and perhaps think a little, you might enjoy “Companion.” He’s always seemed to me like a non neurotic Woody Allen.

To top it off, not only is this an Altman movie, but also it’s about folk singers, who perform on a weekly live radio show. So not only does one have to deal with all the Altmanesque techniques going on, but also we have to listen to country music as well. If you haven’t stopped reading, I advise you might actually enjoy the movie, if not flat out love it. All the performers are outstanding. I really enjoy Streep and Tomlin and paired together as singing sisters Yolanda and Rhonda respectively, they are definitely the standouts here. Lohan plays Streep’s suicide obsessed daughter Lola. Kevin Kline visits his classic slightly screwball, dimwit character he played so well in A Fish Called Wanda (except without the sleaze and the whole criminal thing). We get two humorous singing cowboys in Dusty and Lefty (Harrelson and Reilly). Virginia Madsen plays a mysterious woman in white. Her character seems wildly off at first, until you realize her purpose. It was actually pretty interesting and seemed to artistically raise the level of the film as a whole.

Garrison Keillor plays a version of himself in the film and he also wrote the screenplay. It is through him that all the characters are connected, as he’s the spokesman of the show. He has crafted a witty (Streep and Tomlin’s dialogue with their Minnesota accents is to die for) script in which all the actors contribute 100 percent. Altman’s direction is nearly flawless, with wonderful tracking shots and fluid camera movements. While some may say this film isn’t necessarily up to par with his most beloved films (you’ve got your MASH, Nashville, and Gosford Park) this is probably one of his most enjoyable. It’s simple, light and warmhearted.

While the film doesn’t actually skewer the folk industry the way The Player skewered the film industry, anyone wanting an enjoyable worthwhile cinematic experience would be doing himself or herself a favor by checking out A Prairie Home Companion. It’s music to the ears. GRADE: B+
Posted by Chris at 7:46 PM

But one of the trends in San Francisco nowadays is the Speed Dating.
To ensure all these safety tips while you are towing
its necessary to have a good towing services. Its not even a
bad idea to pre-choose your hotel and make reservations before
you leave.