O Draconian Devils! O Lame Critics! What Were They Thinking Ripping “The Da Vinci Code” to Shreds? PS: It's Good 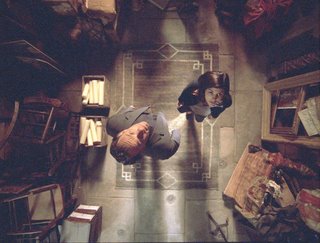 Was it Robert Langdon in the Louvre with the Revolver? That is the initial question at the start of “The Da Vinci Code,” the film based on the hugely popular best-selling novel by Dan Brown. The Da Vinci Code (I actually read it, so it must be good) is a great story with good writing but it’s definitely not To Kill a Mockingbird. So is it so surprising that the film version isn’t exactly Citizen Kane? Let me give it to you straight: the movie is very good and it’s probably the best filmed version that could have been made from the source material. The book itself wasn’t exactly screaming to be made into a film, so there you go. I have to say that I’m surprised and slightly ashamed of some of the critics’ thoughts on the film. I broke my cardinal rule of movie going and actually read nearly every critic’s review before seeing the film. The opinions ranged from the good (NY Post), the bad (Entertainment Weekly) and the ugly (Rolling Stone). Perhaps it’s the most hyped film of the millennium, but let’s break bread with director Ron Howard and writer Akiva Goldsman and see what they gave us.


So what did Opie get right? Well the movie follows the plot of the book very closely, but there are plenty of tweaks here and there. The beginning of the film goes by very fast and if I hadn’t read the novel I might have been slightly lost. It’s as if they want to get past the murder scene and get on with everything else. If you don’t know the story here it is. Jacques Sauniere the curator of the Louvre in Paris is murdered by an albino Monk named Silas played by a campy, disturbing Paul Bettany who spends his free time getting naked and whipping himself as if he were Jesus (I thought this was a family friendly Catholic film, oh wait I’m wrong, Catholics hate it). Silas is a part of a conservative religious group Opus Dei who want certain people to shut up about “a secret so powerful that if revealed it would devastate the very foundations of mankind.” And it’s not that Brittany Spears is pregnant again. But we’re on the right track…

Enter Harvard professor and expert symbolist Robert Langdon (a subdued Tom Hanks) who is brought to the scene to help answer some questions. You see while bleeding to death, Mr. Sauniere got naked and covered himself with symbols, laid out a bunch of clues and posed himself like Da Vinci’s Vertuvian Man (the sketch of the naked guy in the circle). Officer Bezu Fache (Jean Reno) really wants to charge Langdon with the crime to make things easier on the French police. Enter Sophie Neveu (Amelie’s Audrey Tautou) a French cryptologist who quickly befriends Langdon because she knows Fache is going to make him the scapegoat. Oh and by the way Sauniere is her grandfather.

This leads to the scavenger hunt to end all scavenger hunts. We get car chases, chases on foot and a stop at Da Vinci’s greatest masterpiece, The Mona Lisa. It is the mystery of why Sauniere was killed, why he arranged himself in such an odd way before dying and what artist Leonardo Da Vinci has to do with any of it that made the book such a fascinating page-turner. Each chapter was a cliffhanger and the film wants to be the same thing. Most critics attacked the film’s drawn out exposition between characters. This is the kind of stuff that makes for in-depth reading but on film can seem tedious or boring. However, it never really seemed tedious or boring to me. Howard uses what’s supposed to look like stock footage during the characters’ history lessons that help show the audience what actually went on. This story required a lot of exposition and history lessons about Christianity and symbols and all that other junk reserved for college lectures.

Let’s face it; this is why perhaps adapting the book for the big screen just wasn’t the greatest idea in the history of great ideas. Howard alters parts of the book so they make better sense on film. Good job! He actually CUTS OUT a lot of exposition from the book and even adds a little bit more to the characters. The ending has been changed just a little and surprisingly makes a whole lot more sense. And kudos to Ian McKellen for another top-notch performance as Langdon’s hobbling professor friend Leigh Teabing. And great job Hans Zimmer for another haunting score that's put to good use.

I wont say anything else about the plot even though I’ve left out QUITE a lot. (I wouldn't want to give you too much exposition, God forbid) The movie and novel, which is FICTION, so don’t get your knickers in a twist when you realize what the story is trying to propose, (silly conservatives!) will be a lot more fun if you don’t know its secrets. If the film does anything wrong it brings out the book's ultimate flaws. The characters are paper thin, and the book is really just a few characters going here, trying to figure out a puzzle or math problem, and then moving on to a new location.

Even though I knew the story going into it, the movie is a fun, exciting way to spend two and a half hours. Shame on the critics who shrugged off the film like it was the latest installment of The Fast and the Furious. This is a smart thriller that doesn’t rely on explosions or Arnold Schwarzenegger to create suspenseful excitement. God forbid we, as moviegoers have to think during the summer months. For the first time, I’m ashamed to call myself a film critic.

NOTE: At the film’s premiere at the Cannes Film Festival, supposedly the audience burst out in laughter during one of the film’s big revelations. I do know where in the film the viewers most likely laughed and no one in the theater laughed when I saw it. However, even if you do laugh, what do you expect from the guy who wrote the dialogue for Batman & Robin? Case closed. GRADE: B+
Posted by Chris at 10:44 PM

I read this piece of writing completely on the topic of the resemblance of most recent and preceding technologies, it's amazing article.


Look into my webpage - Inverter Fuji

Wow, amazing weblog structure! How lengthy have you been running a blog for?

you make running a blog glance easy. The entire glance of your web site is wonderful, as smartly as the content!