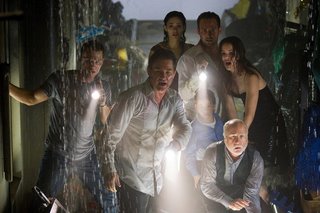 So May gives us our first “remake” of the summer movie season. Director Wolfgang Peterson who brought us such gripping films as Outbreak, Air Force One, and The Perfect Storm decided to go the disaster route and pay homage to those “let’s throw a bunch of has been celebrities together and watch them try to survive” genre films of the 1970s. I’m all up for watching people try to overcome ridiculous obstacles, which is why The Poseidon Adventure from 1972 is one of my favorite disaster films. It has everything to enjoy in a film about a luxury ocean liner that’s capsized by a tidal wave on New Years Eve leaving only a handful of former Oscar-winners to climb up through the dangerous, overturned ship in hopes of a rescue. Well now that you know the plot of the original. Let’s see how the new film, staring Kurt Russell, Josh Lucas, Richard Dreyfuss and a handful of other third rate actors, stands up.

The original film had a running time of about two hours. It takes an entire (slightly boring) thirty minutes to get to plot point one AKA the capsizing of the ship. The new film hardly wastes any time pushing the capsizing to within the first fifteen minutes. UPGRADE! Even though the actors in the original film had strong acting pedigrees, most of the supporting characters were stubbornly horrible actors. Take that little kid. Who wasn’t praying that little tyke was going to drown first? The acting in the new film is not particularly memorable but it’s far from terrible. UPGRADE! While the opening of the original film took a while to get going it at least set up memorable characters. I actually find myself caring about who lives and who dies. The new film spends about five minutes setting up the characters and their “stories” but alas the boat turns over before we can learn anything worthy of remembering. DOWNGRADE!

Remember I mentioned all the former Oscar-winners from the original film? The cast included the preachy Gene Hackman, the grouchy Ernest Borgnine, and champion swimmer Shelly Winters. It was rather fun watching such stars ham it up as they made their way through the ship. The new film plops people like Kurt Russell and Josh Lucas into our laps. But just our luck, Richard Dreyfuss shows up as an aging gay man. Of course we know he’s gay because he has a huge stud in his ear, and refers to someone on the other line of his cell phone as “he.” Welcome to the 21st century Poseidon! The rest of the cast consists of people you don’t really know. You know the “oh she’s from that movie” and “oh isn’t that the guy from…” type of people. We do get Oscar-nominee Matt Dillon's younger brother, Kevin Dillon looking pretty ticked off that he's stuck in films like Poseidon. This new cast? DOWNGRADE! Speaking of the cast, there is a serious lack of cutesy, Jewish elderly people! Where are the Shelly Winters and Jack Albertson replacements? One of the best parts of the original film was the Oscar-nominated performance of Ms. Winters, who gained weight for her role. DOWNGRADE!

One of the most obvious reasons for updating this story is to create more realistic and more intense special effects. The original film was made prior to CGI technology and it handled its effects rather well. (It earned a special achievement Oscar at the Academy Awards that year for special effects) I was worried that the new film was going to have the cast act in front of a blue screen the whole time. And while certain parts were obviously computer effects, I was pleased with how they turned out. UPGRADE! The film is a lot gristlier than the original. The capsizing of the ship by the “rogue wave”, and the horror it creates for the passengers, was done pretty well. UPGRADE! And now the most unfortunate thing missing from this new adventure: camp value. The original was goofy in such a good way that it made it that much better. This film pretty much takes it self seriously, as if it were Titanic 2 or something. While the whole premise itself is cheesy, I must admit the cheese factor was slightly low. The entire movie seemed to be lactose intolerant. DOWNGRADE!

If you’re even a slight fan of the original you’re probably going to enjoy this “reimagining” which according to its opening credits is based on the book. Oh I’m sure. At least it’s not “based on a true story.” This is pure, summer action-adventure. Turn your brains off like you had to do to enjoy Twister or Dante’s Peak and just enjoy the ride. GRADE: B
Posted by Chris at 1:26 PM

continuously i used to read smaller content which as well clear their motive, and that is
also happening with this paragraph which I am reading now.


Here is my web blog ร้านอาหารอีสาน

If it doesn't, pull out the manual, and check to see if there's anything else that you need to do.
Top rated auto body part repairing, installation and paint service
for competitive price. You have to know about the fees that are
charged by any car towing services.

If it doesn't, pull out the manual, and check to see if there's anything else that you
need to do. Top rated auto body part repairing, installation and paint
service for competitive price. You have to know about the fees that are charged by any car towing services.