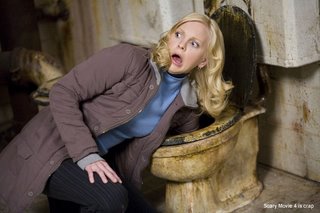 Spring 2000: Airplane! being my favorite movie of all time entitles me to experience joyous rhapsody every time a new spoof movie comes out. When I first heard of the news that there is going to be a parody of popular scary films, most notably Scream and I Know What You Did Last Summer, I was unbearably excited. The Waynes Brothers are the writers with some other guys thrown in. Anticipation ensues. Later, I find out that the R-rated film will be released exactly on my 17th birthday: July 7, 2000. I’m later disappointed to realize the one other person that will see it with me, my best friend & fellow critic, will not be 17 until November.

July 7, 2000: It is my 17th birthday. I’m finally old enough to buy tickets to R-rated movies. And what could be better than the movie I’ve been waiting to see all year opening on my birthday? My underage friend and I approach the ticketseller only to be turned away. For I cannot purchase two tickets. Alas, we buy tickets for The Perfect Storm and then have to sneak in. My dream of buying my own R-rated ticket for the first time on my own birthday is crushed. Flash forward 2 hours. I exit the theater practically in tears. Everything in Scary Movie went right. It was funny and not only was it a spoof movie, but it parodied movies that I love so much: slasher films. Critics basically hate the film, because of its gross out humor. I could care less. I would go on to see the film in theaters two more times that summer.

July 2001: I am vacationing in Ireland with my family. While I tour ancient Irish castles and kiss the Blarney Stone I think about how everyone in America is able to go see Scary Movie 2 while I have to drive around a foreign country for two weeks. My friends being my friends, wait to see the movie until my return to the States. I go see Scary Movie 2 and while I enjoyed it wholly. It was not nearly as good a film as the original. Of course on repeat viewings it gets funnier even though the poorly put together film is basically a bunch of sketch-like scenes sewn together. The cast is funny if not wholly inspired. Perhaps this was to be the last of the Scary Movies.

Early 2003: News breaks that a 3rd Scary Movie installment will be made without the Waynes. Airplane! co-writer/director David Zucker takes the helm. I wet my pants just a little. I finally have a marriage of one of the Airplane! guys with his own directorial take on one of my favorite film franchises.

October 2003: Scary Movie 3 opens to poor reviews, except for me. I loved the film’s humor and its take on the various film parodies. People seemed to be turned off by the lack of disgusting gross-out humor that was the first two films’ staple. Oh well. Mr. Naked Gun himself Leslie Nielson shows up. I almost wet my pants a little again. If Mr. Zucker were to direct a 4th Scary Movie, I’d be the first in line.

Late 2005: News breaks of a definite 4th Scary Movie film. I, unlike many others, am ecstatic. Anna Faris is returning, as is Regina Hall. I hear Leslie Nielson is back and even Molly Shannon has decided to join the cast according to Yahoo! Movies. One of the spoofed films will be War of the Worlds, which was one of my favorite films of 2005. This can’t get any better…

April 14 2006: Scary Movie 4 opens with a thud. Ten minutes into the movie and I’ve barely cracked a smile. Dr. Phil and Shaquille O’Neil? Come on. They had nothing funny to say. Ok, so Hot Shots! alum Charlie Sheen returns, but his one scene involves swallowing a bunch of Viagra pills. We get to watch him cavort around with his gigantic erection while a fake cat takes a liking to it. Jim Abrahams, one of the Airplane! guys, has been credited with the screenplay along with SM3 writer Craig Mazin. The writers surprisingly rely way too much on visual gas such as people getting hit in the head. This occurs every five minutes. My own head began to hurt after awhile. It wasn’t even really funny the first time. Hardly any of the dialogue is funny. What happened to lines like, “A hospital? What is it?”
“It’s a big building with patients, but that’s not important right now.”
It’s as if the writers have catered the jokes (which must of seem funnier on paper) to get laughs from 10 year olds. There were plenty of kids in the audience that were having a much better time than me. The film’s posters were funnier than most of the film’s jokes. Perhaps the marketing department should have written the film.

What about the actors? Anna Faris is funny, but never really gets a chance to shine like she did in the other films. The same with Regina Hall as best friend Brenda and Leslie Nielson as dopey US President Harris. When Molly Shannon shows up in a bit part its funny JUST because it’s Molly Shannon! The problem with the humor in Scary Movie 4 isn’t the “been there, don’t that feeling,” it’s that the jokes really aren’t all that funny to begin with. It’s one thing to recycle old jokes but there’s nothing really here that sticks out or goes somewhere even remotely memorable.

The shoestring plot revolves around an alien invasion ala War of the Worlds while Anna Faris solves the mystery of her new haunted house ala The Grudge. Other films spoofed include Saw, The Village, and Oscar winners Million Dollar Baby(?) and Brokeback Mountain. I laughed here and there but I found myself scratching my head for most of the film’s duration. Where did it all go wrong? If I’m surprised by anything, it’s that my initial reaction after seeing the film was, shockingly to my saddening surprise, I hope there’s no Scary Movie 5. (Of course when this movie comes out on DVD, I’ll probably end up buying just because the Scary Movie pedigree is good enough for me) GRADE: D+
Posted by Chris at 11:32 PM

You forgot to mention at Scary Movie 3, we were the only white people there, and also the only people to laugh (and by laugh I mean tear up and wet our pants) at the "I just want to tell you both good luck, we're all counting on you" part.

Hmm I love the idea behind this website, very unique.
»

They ve worked for those who had been patient to wait a couple of months before
see the results. There was no report of any subject experiencing any accident with penis extenders.
As with any type of cosmetic surgery, it is not uncommon to develop psychological and emotional
effects.

Useful info. Fortunate me I found your website unintentionally, and I'm shocked why this
twist of fate did not happened in advance! I bookmarked it.


Feel free to visit my web site - After Effects Tutorial