When Politics Go Pop: “American Dreamz” Serves Up a Slice of Americana 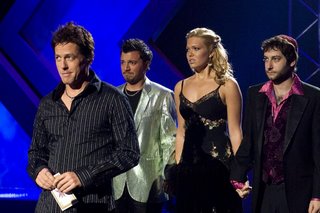 I have two confessions to make: I’ve never actually voted for anybody on American Idol, but I have recently gotten into the show. Fortunately, I DID vote in the presidential election so I am partially free of director Paul Weitz’s (American Pie, About a Boy) pop culture/political firing squad known as American Dreamz. At first a satire of the wholly popular reality show American Idol and the Bush Administration felt like an awkward fit. Like trying to stick a square peg in a round hole. But really the more you think about it they go hand in hand. It’s our American right to let our voice be heard not only when it comes to who runs our government but ALSO who gets to win a coveted record deal on one of the country’s favorite TV shows. I guess it would take someone like Weitz who could see the connection between adolescence and baked goods, to come up with a film that throws terrorism, the presidency and pop culture into a cinematic blender. Of course the big question is did he pull it off?

I was excited to see American Dreamz, so I have to admit that the film didn’t quite live up to my high expectations although I would call it a moderate success. The actors are all good and well cast. We have Martin Tweed (Hugh Grant) as the producer & host of American Dreamz (a mix of Ryan Seacrest with a dash of the caustic Simon Cowell). Then there’s the wanna be superstar Sally (Mandy Moore, who seemed wildly appropriate for this role) and her loving yet pushy mother (the always wonderful Jennifer Coolidge) But Sally’s not the only one who loves the song and dance. We get Omer a Middle Eastern teenager who finds himself singing show tunes while in terrorist training camp! Martin is sick of the Sallys who always seem to make it onto his show; he wants some “variety.” Then we get dumb President Staton (a silver-haired Dennis Quaid, doing his best Bush impression) who’s been out of the public’s eye for weeks for who knows why. The public believes he’s had a mental breakdown but Staton’s Chief of Staffs (Willem Dafaoe channeling Dick Chaney, without the rifle) insists he do something to gain attention. So naturally he should appear as a guest judge on America’s favorite television show: American Dreamz. If this all sounds ridiculous it is. Weitz knows it is and he has fun with it. But alas this is not all.

There’s a terrorist plot brewing amongst Omer’s radical terrorist trainers who want the young man to unleash a WMD on live television (what a ratings grabber that would be!). There’s hardly any seriousness in the situation but an underlying sense of wit works nicely. We’re not really supposed to take what’s happening seriously. After all one of the film’s main targets is our media-obsessed society. I mean are the advertisements correct in notifying that this country would rather vote for a pop idol instead of their next president. I’d be afraid to believe it, but wouldn’t deny it if it were true. What one can gather from the film is that reality shows like American Idol is completely staged for the camera and that any idot can run our country and that even terrorists use their TiVo to rewind while watching live American television.

If there’s anything truly wrong with the film its not that it’s mean-spirited although it is. Or that is mocks our government and its sense of American pride, which it does. Or that it turns its characters into clichés, which it does. It’s that really the whole thing isn’t as flat out funny as it could have been. Believe me I welcomed the terrorist plot and the mocking of our president and the skewering of America’s strange obsessions. But when it came right down to it, the premise seems better than the final outcome. The actors have a great time lampooning everything American, but while they are having a great time, we wish we could get just a little bit more in on the fun. GRADE: B-
Posted by Chris at 3:52 PM

If you are going for most excellent contents like myself,
just pay a visit this web page every day for the reason that
it provides quality contents, thanks

Howdy are using Wordpress for your site platform?
I'm new to the blog world but I'm trying to get started and set up my own. Do you
need any coding expertise to make your own blog? Any help would be greatly
appreciated!