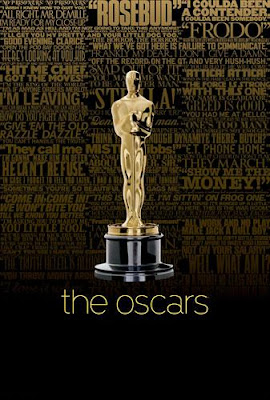 Well well well. The Departed rained on Little Miss Sunshine's parade and took home the gold in one of the most exciting and entertaining Oscar ceremonies in ages. Everyone was jumping for joy here at my party, how about yours? Scorsese's Boston crime saga cleaned up (sorry Marky Mark, you'll have other shots) with 4 total wins. And wouldn't you know Alan Arkin beat Norbit star Eddie Murphy. I'm not so sure he'll have another shot. Ellen not surprisingly turned out to be a great host. Her highlights included giving Martin Scorsese her unpublished script and vacuuming underneath Penelope Cruz's dress. Even with 8 nominations Dreamgirls didn't exactly clean up except for frontrunner Jennifer Hudson and the sound mixers. I guess perenial sound loser Kevin O'Connell will have to try again next time. As for my predicitions, I had a rough night. (No foreign film award for Pan's Labyrinth? No original song for Dreamgirls? No best animated feature for Cars?) And wouldn't you know I got all the boring awards incorrect. I only got 13 categories correct, how about you?

It’s almost Oscar night and one thing is certain: no one really knows who is going to take home the top prize. The Best Picture winner is fogger than ever and you might as well just flip a coin to predict who’ll win. Will the Academy select the royal drama The Queen? The war drama Letters from Iwo Jima? The crime drama The Departed? The multicultural drama Babel? Or the family dramedy Little Miss Sunshine? History would rule out Sunshine because it’s funny, has the least nominations and it’s director(s) failed to earn a nom. The Academy has never awarded Best Picture to film with mostly subtitles, sorry Babel and Letters. Many think The Queen is Helen Mirren’s show. And The Departed, made the most money and is a critical fav but is this bloody film Best Picture worthy?

These are my predictions and come Oscar night, I hope to at least have a few of these correct: (winners appear in BOLD)

Best Picture
Will win: The Departed
I seriously have no clue what film is going to win. It seems to come down to Babel and Little Miss Sunshine, but I still think The Departed has a very good shot. Whoever predicts this category correctly has luck on their side.
Should Win: The Departed
It’s by far my favorite film of the bunch, although I’ve yet to see Letters from Iwo Jima. Little Miss Sunshine is a great film, although I’m not so sure it’s Best Picture worthy. Babel is epic and enjoyable, but if it were to win it would feel like a Crash rehash.
Should have been nominated: United 93

Best Actor
Will Win: Forest Whitaker, The Last King Of Scotland
I haven’t seen this film, nor am I fan of Whitaker, but I hear he’s simply amazing. Seeing as though he’s won every other award, it seems obvious he’ll get it. Although, his boring acceptance speeches (Golden Globes, SAG) have been pitifully boring and unenlightening. Those voting with their hearts may check off Peter O’Toole who has never won before. Had his film Venus been better, he’d be a shoo-in.
Should Win: Leonardo DiCaprio, The Departed
Wait? He’s not nominated for The Departed? What was the academy thinking! He’s wonderful in Blood Diamond, but he’s even better in The Departed, and had he been nominated for it, he might have siphoned some votes away from Forest Whitaker. Second place should be Ryan Gosling whose extraordinary performance in Half Nelson sill amazes months later.
Should have been nominated: Leonardo DiCaprio, The Departed

Best Actress
Will Win: Helen Mirren, The Queen
If you don’t predict that Mirren will win, you’re a moron. She can’t lose! Who would even have a shot of winning? The other actresses are great, but this is Mirren’s year.
Should Win: Helen Mirren, The Queen
I loved Meryl Streep in The Devil Wears Prada, but whether she actually deserves to win an Oscar is questionable. I loved Little Children but Kate Winslet will definitely have more shots at this.
Should have been nominated: Annette Bening, Running With Scissors


Best Director
Will Win: Martin Scorsese, The Departed
Finally! While I’ve never been a huge Scorsese fan, I think he at least deserves an Oscar for crying out loud! His work on The Departed was excellent. It’s film that could have easily become a tired crime saga, but it turned out to be the best film of the year! Kudos!
Should Win: Martin Scorsese, The Departed
Hello, it’s my favorite movie of 2006! Clint’s won before, Paul Greengrass’s nom is his award, and hopefully Frears and Inarritu will have other shots down the road.
Should have been nominated: Valarie Faris and Jonathan Dayton, Little Miss Sunshine
(If it wins best picture, it’ll just make them feel like crap for God’s sake!)

Best Supporting Actor
Will Win: Eddie Murphy, Dreamgirls
He was really good in Dreamgirls and he added greatly to the scenes he was in. Murphy has been making pretty crappy movies lately, but I think the Academy will recognize him here.
Should Win: Alan Arkin, Little Miss Sunshine
As Grandpa, Arkin gives a caustic, brilliantly funny portrayal of a grumpy old man. But of course he’s lovable and his scenes with fellow nominee Abigail Breslin are warm and touching.
Should have been nominated: Jack Nicholson, The Departed

Best Supporting Actress
Will Win: Jennifer Hudson, Dreamgirls
If she doesn’t win, she should stand up during the winner’s speech and belt out And I Am Telling You I’m Not Going and storm out. I though her performance in Dreamgirls was award worthy… Tony award worthy. Her scenes are affecting and she makes you want to stand up and cheer, but let’s face it, we’ve all seen better screen acting.
Should Win: Rinko Kikuchi, Babel
This unknown Asian actress gives a heart wrenching performance, without uttering a single word. As deaf-mute teenager she adds the most to the movie. While her character’s storyline doesn’t quite fit in with the rest of the film, if you took her out, the film would suffer. Adriana Barraza was also amazing, but I had to give Kikuchi the edge because she gave a great performance without speaking. Hopefully, little Abigail Breslin will have other shots when she’s older.
Should have been nominated: Catherine O’Hara, For Your Consideration

Best Foreign Film: Pan's Labyrinth The Lives of Others

Best Short Film (Live Action): Eramos Pocos (One Too Many) who cares!

This question is not clear to me.
You were not mistaken, all is true
I apologise, but, in my opinion, it is obvious.
I will know, many thanks for the information.
I consider, that you are not right. Write to me in PM, we will discuss.

Brilliant idea
The authoritative message :), curiously...
I think, that anything serious.
I understand this question. It is possible to discuss.
Yes, really. All above told the truth.

Hi i am kavin, its my first time to commenting anywhere, when i read
this post i thought i could also make comment due to
this sensible piece of writing.

Hi there, I check your new stuff daily. Your story-telling style is awesome, keep up the good work!