I Saw the Sign: “Zodiac” is an Enjoyable Murder Mystery 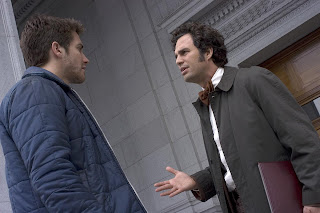 I love serial killers. Okay that makes me sound like Ted Bundy; rather, I enjoy learning about what goes on inside a serial murderer’s mind. Some might not think so, but it can be fascinating. I really enjoy the sick ones: Dahmer, Gacy, Gein, you know, the ones that cut people up or turned their home’s crawl space into a foul grave. Can you blame me? I like movies like Saw and Hostel. So, it’s not surprising to find out I was thrilled to learn David Fincher was making another serial killer flick, but the Zodiac? I’ve never found him a very interesting or compelling killer. And to me, besides the fact he was never caught, there’s not much about him that’s fascinating. Therefore is it not surprising that I didn’t absolutely LOVE “Zodiac”? It is a very good film and a fascinating look at the people who literally became obsessed with finding out who this maniac was.

Since most of us know that the Zodiac was never identified (even though some of his victims survived) we can probably guess the film’s ending, but it’s the process in how we get there that’s compelling. The film starts superbly with a young couple in a car in the late sixties. We’re just waiting to see how they get killed and it’s suspenseful. The murder scenes are the best parts of the film. The next couple by the lake is especially good, it’s hard to know where it’s going exactly. The killer shows up with a gun, but they end up being stabbed.

The main characters included San Francisco Chronicle cartoonist and single dad Robert Graysmith (Jake Gyllenhaal). Paul Avery (Robert Downey Jr.) is a writer for the paper. The Zodiac begins by sending cryptic letters to the Chronicle, in code (paging Robert Langdon), in which he demands they be printed in the circulated paper. Soon Inspector David Toschi (Mark Ruffalo) enters the scene as the case’s lead detective. The actors are good, and while many might find this to be an exceptional cast, I found it just good. These are all watchable actors, but none of which I’m a particular fan of. As for the women, I’ve never particularly liked the blandness that is Chloë Sevigny (she’s Gyllenhaal’s blind date and eventual wife).

While the film is long, that’s not a problem. The film runs smoothly and is moderately intriguing, but the film’s second half (which has no more murder scenes) gets slightly hysterical when Robert takes over (Paul has a complete collapse and leaves the paper) and becomes obsessed with the finding out the killer’s identity. Downey’s character is a scene-stealer and he’s missed in the fim’s last half.

This is the least David Fincher-esque of all his films (although I’ve never seen The Game). He has some trademark stylistic camera moves and placements. I loved that taxicab aerial view shot. While he played homage to Hitchcock in Panic Room (with fun experimentation with long takes and nifty camera moves), here he pays homage to 70s procedural flicks. This is more of a police mystery rather than psycho thriller, which seem like it could definitely have been released in 1978. It plays more like All the President’s Men than Silence of the Lambs, which isn’t necessarily a bad thing, just unexpected.

Unfortunately we get no real insights into a serial killer’s mind. We don’t get the sense of the fear of what it was like to live in the Bay area during this time, but we get to feel what it was like to be a reporter at a newspaper. That seems odd to me. One scene towards the end that is supposed to be suspenseful isn’t because it would be way too obvious if a certain character just happened to unwittingly step into the killer’s domicile ala Jodie foster at the end of Lambs.
While the film is enjoyable, sophisticated and unexpectedly not overly grotesque, I couldn’t help but feel like the whole thing was procedural. It didn’t feel exactly fresh or new, but I found it a worthwhile cinematic experience. GRADE: B

It is for the folks who are playful, active, stylish and replica watches sporty even in their day-to-day activities and love technological stability without looking like wearing a piece of fake breitling technology on their wrist. rolex replica indeed travels an interesting path that way. A very urbanely and uniquely designed watch that grabs attention as a dressier choice to be sported at the right occasions. The rolex replica sale is about the subdued, everyday style with class at manageable price. Over the past two decades and a half, the breitling replica uk from street cultures, dance music and high-performance lifestyles. The replica watches uk fuses all that and stands out from the rest of the fashion watches.