Skate Movie: Figure Skating Gets It’s Due in the Uproarious “Blades of Glory” 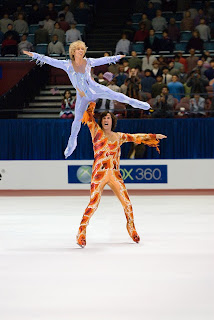 It’s been done before certainly, but at least here it’s done well enough that it doesn’t matter. Blades of Glory is about two male figure skating rivals who are forced to skate together. And surprisingly the film doesn’t rely too heavily on male-on-male ice skating jokes. It basically pokes fun at figure skating competition in general. Who wouldn’t love to see Will Ferrell and Napoleon Dynamite’s Jon Heder gliding ever so gently across the ice to popular pop songs? If you thought the ads for Blades looked stupid, be prepared to laugh loud and often.

Ferrell plays Chazz Michael Michaels a sexaholic figure skater with the figure of well, not a figure skater. Heder plays Jimmy MacElroy a shaggy-haired orphan who just so happens to have skated since he was a little boy. Both are introduced “Access Hollywood” style and we know that right from the start this isn’t a film to be taken extremely seriously. We open up with Jimmy as a young boy skating with nuns to the tune of Andrea Bocelli’s “Con Te Partiro.” An event occurs in which both rivals are banned from competing in professional male single figure skating. But alas there is a loophole found by Jimmy’s stalker fan Hector who hilariously gives John Lennon’s stalker a run for his creepy money.

Since both male skaters are encouraged to join forces and skate together we need another villain! Enter in brother and sister team Stranz and Fairchild Van Waldenberg (Will Arnett & Amy Poehler). They are a manipulative, incestuous (and funny) pair who makes life miserable for their innocent, younger sister Katie (Jenna Fischer of The Office), who is always being blamed for their parent’s tragic death. Both Arnett and Poehler work extremely well together and Fischer makes a perfect foil for the crazy pair.

Meanwhile Chazz and Jimmy are coached by none other than Mr. Coach himself Craig T. Nelson. According to imdb his character is simply “coach.” Coach teaches this flamboyant pair to work as a team and to get over the fact that millions will be making fun of them. Their situations are comical and engaging and while it could have easily been montage, montage, montage, the script actually has being both smart and funny on its plate.

The film (directed by Josh Gordon & Will Speck) has plenty of great things going for it. We get the standard figure skating cameos (Brian Boitano, Nancy Kerrigan etc) and even frat pat regular Luke Wilson shows up for fun. The skating sequences are a hoot. The costumes are appropriately ridiculous. The dialogue is funny, must of it seeming to be improvised. I must credit first time writers Jeff & Craig Fox for simple hilarity. The cast is entertaining, and I would be lying if I said I didn’t get caught up in it all. While some may find that this has been done before as “Dodgeball” or “Talladega Nights,” Blades of Glory offers enough laughs worthy of a gold metal. GRADE: B+