Lord of the Rings: “Peaceful Warrior” is a Slightly Corny Tale of Personal Triumph 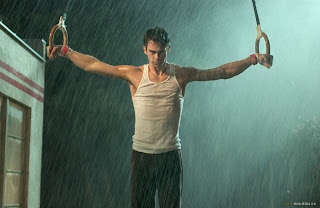 I was expecting a historic fight. I was expecting a Yoda vs. Mr. Miyagi battle. Both were inspirational mentors wise beyond their years. While their respective films may have ended, there are plenty of “let’s train the cocky newbie” stories left to be told. Now we have the true story, as told in the book “The Tale of the Peaceful Warrior,” of Dan Millman who was a star college gymnast who seemed to have everything. He was fit and dedicated to his sport, had great grades and an equally successful social live. But what about on the inside?
Those expecting a simple triumph over adversity tale will be disappointed to know this is a self-help book disguised as a movie. And that is not necessarily a bad thing, but the film can be rather preachy at times. Dan (Scott Mechlowicz) is the kid who thinks he has it all until he meets the random gas station attendant who he refers to as Socrates (Nick Nolte). Apparently this man can leap from the ground to the roof in a split second and Dan wants to know how. But before he can learn about Socrates he has to first learn about himself.

As written and directed by Victor Salva, the film has a structure of what I’d like to call “gym scenes” and “gas station scenes.” In the gym scenes we get to learn about Dan and his teammates who are all training hard for the Olympic qualifying competition. We get scenes of strong young men training on the hobble horse or dangling on the rings, which is Dan’s main event. Everything he’s ever wanted is in those rings. It’s through the “gas station scenes” in which Dan learns that it’s not about the goal but the journey that’s important.

Of course tragedy strikes and it doesn’t look very good for Dan. He has shattered his right leg and it’s unlikely he’ll ever be able to compete again. I’m sure you can guess what happens. Dan is determined! Socrates will help his young protégé; his young “peaceful warrior.” Meanwhile Dan catches the eye of Joy (Amy Smart) who is somehow a relative of or friend of Socrates. The film thankfully doesn’t give the love story a full storyline, yet it’s so underdeveloped that it’s borderline unnecessary.

For all its philosophy 101 attributes the film is slowly paced and plodding, but it does have a good message that is fairly worth seeking out. While the film isn’t vacant of clichés, it has enough original flourishes to give it a decent recommendation. Nolte’s performance is subdued and mysterious. Mechlowicz makes his character interesting enough to care about, even though he’s not really altogether likable. And it appears that the actor has done a lot of his own gymnastics. His teammates are just caricatures and appear so that the “gym scenes” can actually have dialogue. The camerawork is very good, with some neat compositions and nice visual sense.

A standard “look inside yourself” inspirational drama, this time about gymnastics, “Peaceful Warrior” is fairly engaging and it does inspire. Whether or not you’ll find the “gas station scenes” all that interesting or believable is another story. You’re bound to get caught up in it or laugh out loud. The studio obviously had no faith in the film itself, as it only received a limited release last summer and has hardly made a blimp on the radar since then. GRADE: B-

The place else may just I get that type of info written in such a perfect manner?
I have a mission that I am simply now operating on, and I have been at the
glance out for such information.

Feel free to surf to my website :: After Effects Wave Transition