Fear Window: “Disturbia” is a Slightly Ingenious Hybrid of Hitchcock and The O.C. 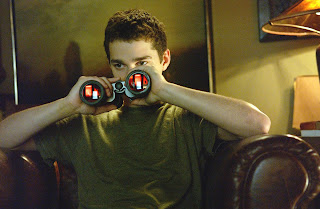 I was disturbed about half way through “Disturbia.” The reason I was disturbed had to do with how much I actually enjoyed it. It’s not an award-worthy piece of cinema, but it’s a lot better than just a high tech Hitchcock rip-off. If fact, it’s leaps and bounds better than Gus Van Sant’s horrendous, ill-fated “Psycho” remake, which still gives me headaches. “Disturbia” takes it’s time to build suspense thanks to D.J. Caruso’s competent direction, enjoyable teen characters borrowed from The OC and a script (penned by Christopher B. Landon & Red Eye’s Carl Ellsworth) that has enough twists and turns to keep this out of the update hall of crap.

The film begins oddly enough with a father and son fishing together. At first you might suspect that you’ve sat down in the wrong theater. Alas something tragic occurs and you realize that this film might just live up to its title. In fact the entire film is slightly ingenious in a way, because it updates a classic film (“Rear Window”) for a modern audience, yet it still remains legitimately faithful to the source material. Okay, so a lot has changed in major ways, but the underlying story still remains. Up and coming actor Shia LeBeouf plays Kale, who is a troubled teen (aren’t they all?) A school incident results in him having to be under house arrest for the summer. He has a sensor on his ankle that fetches the police when he wanders too far from his yard.

So here is summer vacation and this poor guy has to sit in his house all day long. His mom (The Matrix’s Carrie-Ann Moss) rightfully cancels his itunes subscription and cuts the wire to his TV set. What’s a troubled teen to do? He grabs his binoculars and begins spying on the neighbors of course! He’s sometimes joined by his friend Ronnie (Aaron Yo, who plays an enjoyable, if clichéd, ethnic sidekick). Both boys’ libidos race for Ashley (Sarah Roemer) the young hottie who has just moved in next door. She spends her summer afternoons exiting her swimming pool in slow motion. Eventually she becomes watch buddies with Kale and Ronnie.

The film takes its time establishing its characters and that’s a good thing. We will grow to enjoy them and become more worried for them once they get into danger. The danger would be the form of the scary neighbor across the street who just may be a serial killer. I can’t really say anything else without giving away all the fun. The neighbor is played by character actor David Morse (I recall him as Jodie Foster’s dad in “Contact”), and he does a great job of throwing everyone off balance. He’s creepy and then not and then creepy again. The film has fun playing with us, because we’re actually not sure whether everything will just turn out to be a red herring, much like the first half of “What Lies Beneath.”

Elements of “The Boy Who Cried Wolf” make appearances (and the plot is similar to an episode of “The Simpsons” in which a handicapped Bart suspects Ned Flanders of murdering his wife) after Kale causes the cops to come out one too many times. The film also celebrates the medium’s (and the Hitch’s) most favorite theme: voyeurism. And while the film really does take its time getting to the good stuff (Hitch would be proud) it’s worth the wait. In fact, I feel the target audience for this film might even be bored. There are so many elements that are geared for the under 15 crowd, yet I can’t help but think that adults will enjoy it as much as teens. Perhaps they should have pumped up the language to keep out the annoying cellphone texting tweeners.

“Disturbia” is Alfred Hitchcock for the ipod listening, blog writing, You Tube watching generation. It’s hip without seeming too corny, yet it’s mostly intelligent unlike most PG-13 rated scary movie garbage. Most of it is believable and when the characters make stupid decisions or make bone headed moves, you’re quickly able to forgive them. The young leads are appealing and the villain is legitimately frightening. If Hitchcock was still around I wonder what his Ipod playlist would be like? GRADE: B+

Hey I know this is off topic but I was wondering if you
knew of any widgets I could add to my blog that automatically tweet
my newest twitter updates. I've been looking for a plug-in like this
for quite some time and was hoping maybe you would
have some experience with something like this. Please let me know if you run into anything.
I truly enjoy reading your blog and I look forward to your new updates.