And They Call It Puppy Love... The Terrific Fable “Year of the Dog” Has Bite 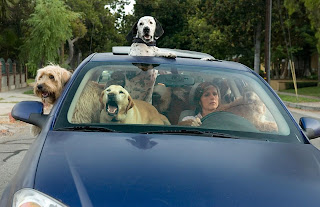 Where has Molly Shannon been lately? The last time she headlined a movie, it was the critically panned “Superstar.” She has since shown up in smaller supporting roles in movies like “Wet Hot American Summer,” “Talladega Nights” and even “Marie Antoinette.” How come this funny lady hasn’t had top billing since 1999? Who knows really, but “Year of the Dog” is a triumphant return. Here, she is funny and emotionally deep as a woman whose best friend is her dog. And then her dog dies.

As Peggy, Shannon imbues the awkward loneliness that was the central characteristic of her Mary Catherine Gallagher SNL character. Of course, here she is playing it for emotional depth, rather than broad comedy. This seems like a role written for her. She has restrained herself and she’s surprisingly capable of being extremely moving. Peggy loves her small dog Pencil. She lets him sleep in her bed with her and she even shares meals with him. She also has an office job at a company where she has a loyal female friendship with Layla (Regina King). King is terrific in this role as the off the wall friend, a supporting role that is usually played by Shannon.

One night poor little Pencil is sniffing around the yard and is tragically poisoned. Peggy is devastated, as is the audience, because her whole world is gone. She is at first consoled by her neighbor Al (John C. Reilly), and then suspects that perhaps he might have something to due with Pencil’s unfortunate demise. Eventually Peggy meets animal lover/vegan Newt (Peter Sarsgaard). A strong friendship builds between them and he insists that she adopt a new dog. Soon she pours herself into animal charity and animal rights activism. She promptly adopts a vegan lifestyle and begins a mission to help animals any way she can. Even when her new adopted dog (an abused German Shepherd) becomes aggressive with her, she refuses to just kick him out. She knows he’s just an animal and she still wants to care for him.

There are a few other people in Peggy’s lives: most notably her brother Pier (Thomas McCarthy) and his wife Bret (a perfect Laura Dern). They are your average suburban young power couple. They have a young daughter and a baby. Bret is the type of young mother who is at constant odds with her daughter’s school’s administration and feels movies like “Babe” are too powerfully emotional for young children, despite its G-rating. Peggy baby-sits for her niece one weekend, in which she promptly drags her to an animal sanctuary where farm animals have been saved from slaughter. Of course an attempt to visit an actual slaughterhouse doesn’t go over too well with the little tyke.

Wanting to take a youngin’ to the slaughter house is just one example of the dark nature of the film, which at times almost seems like Todd Solodnz directing “Erin Brockovich.” It’s funny that Peggy would take a 5-year-old girl to see cows get turned into hamburger meat, and while they never actually make it there, you can’t help but laugh at the absurd situation. Peggy soon goes from animal loving to animal crazy. Her transformation from dog lover to animal activist to animal rights absurdity is not to be missed.

All of Peggy’s actions are a direct result of her pet’s heartbreaking death. It’s through Pencil’s death that Peggy finds out what her meaning in life really is. It’s very unpredictable to figure out what bizarre action she’ll take next or how she’ll end up. We’re not sure if the film is going to follow Peggy and Newt into a blissful relationship and when we find out that’s not the case, we’re completely ready for the next step in the plot. The characters are richly defined and rooted in realistic human behavior. For instance, when Peggy brings in vegan cupcakes to her office, her co-workers quickly refuse the desserts as if they were made of cyanide.

First time feature director Mike White, who co-scripted last year’s odd Mexican fable “Nacho Libre” does a great job behind the camera (a camera which hardly moves; he let’s the actors do the work). His characters are quirky and interesting and he constructs a narrative of true human nature. His film will make you laugh and cry; it’s a fun fable that’s paws above the rest. GRADE: A-

Hi, I do believe this is a great web site.

I stumbledupon it ;) I'm going to revisit yet again since i have book marked it.
Money and freedom is the greatest way to change, may you be rich and continue to help others.