The Gore the Merrier: “Grindhouse” Offers Two Bloody Fun Pictures For the Price of One 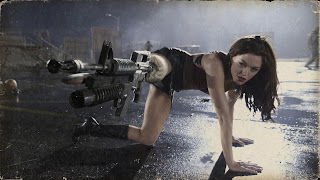 I didn’t grow up in the 70s when cheesy exploitation flicks crowded urban movie houses. Grindhouse is an ode to exploitation and has no social value whatsoever. Grindhouse films were B-movies made famous by small cinemas who’d grind out schlock flick after schlock flick so often that the film itself would become scratched and damaged. These were films not part of the mainstream. And like any popular auteur, directors Robert Rodriguez and Quentin Tarantino have made films that could appeal to anyone who loves going to the movies. Or at least anyone who has a craving to see Fergie get torn apart by ravenous zombies.

Each director has written and directed his own film with phony film trailers appearing before and in-between each movie. It’s important to note that going to see Grindhouse is an experience. It will take over 3 hours of your time, but it’s well worth it. Sit back, relax and enjoy the ride. Let me comment on the fake trailers. We get previews for Machete, Werewolf Women of the S.S., Don’t and Thanksgiving. These are expertly made trailers for films that look undeniably horrible. Of course that’s what makes them so fun. God-awful director Ed Wood would be lovin’ it if he were still kicking. These trailers are a perfect part of the Grindhouse experience. And if you don’t like watching trailers too bad: remember this is a movie for people who love going to the movies!

The first film up is Rodriguez’s “Planet Terror.” In short, it involves a spreading virus, which causes people to blister up and become monstrous zombies. It’s one of the best homage to B-movies ever. Sort of similar to last year’s Troma-inspired “Slither,” this film is awash in colorful characters and even more colorful blood & guts. Rose McGowan is Cherry. She is a go-go dancer, not a stripper. Her leg ends up being a zombie’s lunch. She’s fitted with a literal peg leg and eventually a machine gun. Watching this femme wipe out a horde of bloodthirsty zombies with her machine gun leg is one of the most iconic cinematic images since Dorothy skipped down the yellow brick road. (Too much?) The film has intentionally funny dialogue yet plenty of gross outs and jumps. Horror film fans will be foaming at the mouth. 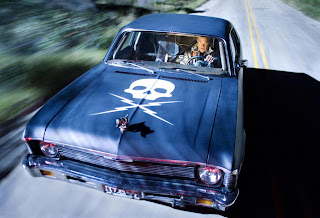 Next is a slight change of pace: Tarantino’s “Death Proof.” This segment stars Kurt Russell as a homicidal stunt car driver. He uses his car which he insists is “death proof” to hunt down unsuspecting victims. Of course he doesn’t expect to meet up with real life stuntwoman Zoe Bell who takes him on the ride of his life. Rosario Dawson co-stars in here with Bell and two others as members of a film crew. Lee (Mary Elizabeth Winstead) is an actress in the film, while Dawson is the make-up girl. The four of them share stories during long dialogue scenes, which could put some to sleep. However, anyone who enjoys Tarantino’s ear for enjoyable, pop culture driven dialogue will love it.

Grindhouse is genre filmmaking at it’s best. The films are skillfully and artfully made (with each director as the credited DP) and even Tarantino gets in on the fun. He plays Rapist #1 in “Planet Terror.” And it’s his best performance since playing an Elvis impersonator on an episode of “The Golden Girls.” Not much more can be said about the films in terms of plot without giving too much away, but this is well worth your time. You won’t be moved, become a smarter human being, or have a life altering experience with “Grindhouse,” but you’re sure to have killer time. GRADE: A