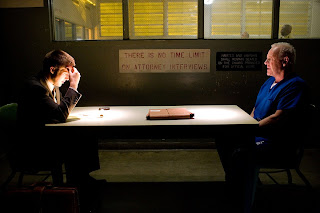 Anthony Hopkins is Hannibal Lecter to some people. And some people is me. A cold chill runs down my spine when I see his face. I know this great actor is just that: an actor. However, it’s impossible not to compare his best performance to his other bodies of work. In “Fracture” he plays another sophisticated psychopath. However, now he has no real apparent motive and no interesting backstory. And even without trademark lines references fava beans and Chianti, this thriller is still miles above the recent Hopkins-less Lecter prequel “Hannibal Rising.” The problem is that for all the powerhouse acting onscreen, director Gregory Hoblit doesn’t give us much here that’s suspenseful or engaging.

Ryan Gosling is definitely one of the best young actors working these days. Every performance he gives is outstanding. And I think it was I who first said that he would get an Oscar nomination for his role in the wonderful “Half Nelson.” Okay, so I wasn’t the only one, but still, he was amazing! While his acting is still up to par, the only real reason to see this film is to witness the legal clash between our young hero Willy Beachum (Gosling) and our aged villain Ted Crawford (Hopkins).

Ted’s younger wife Jennifer (Embeth Davidtz) is having an affair with Rob (Billy Burke). Apparently this is ground for murder and in first ten minutes poor Jennifer has been shot in the head in her own home, by her own husband. Ted has known about the affair and decided to take matters into his own hand. The police enter Ted’s home and promptly arrest him. And lo and behold, one of the arresting officers is Rob. The police get a signed confession; this is an open and shut case. Or at least local hotshot District Attorney Willy thinks so. He decides to take the case and Ted decides to act as his own lawyer.

And so begins a battle of wits between theses two men who must carry the rest of the film. All of the evidence eventually becomes unusable. A conflict of interest makes the signed confession useless. And before Willy can say, “Boy am I screwed,” Willy is confronting the judge about being acquitted. The script introduces a forced love interest in the form of Nikki (Rosamund Pike) who is supposed to be Willy’s new boss. Of course that doesn’t stop them from doin’ it.

As it turns out Jennifer is in a coma. Her prognosis is not good, but it’s not really bad either. She may wake up she may not. Willy visits her in the hospital because he feels guilty for letting the man he knows did it go free. The point is that he just can’t prove it in court. Is the film trying to say our justice system doesn’t work or that guilty people get off too easy? I’m not really that sure. In fact, I’m not really sure what the film is trying to do at all. If it’s supposed to thrill, it doesn’t. If it’s supposed to be suspenseful, it’s not. If it’s supposed to showcase powerhouse acting, it does. And let’s not forget past Oscar nominee David Strathairn as Gosling’s employer who has a commanding presence.

I know this if off topic but I'm looking into starting my own weblog and was wondering what all is needed to get set up?

I'm assuming having a blog like yours would cost
a pretty penny? I'm not very web savvy so I'm not 100% certain. Any suggestions or advice would be greatly appreciated.
Thank you

IBOGA DEALS
Are you suffering from drugs opiates/opioids, cigarette,Alcohol and other adictions and you are looking for a good means to detoxification? We supply high quality and purity ket and iboga in all it's from (iboga TA,Ibogaine HCL, Iboga roorbarks, iboga powder,iboga Capsules
Buy iboga-root-bark-chips-shavings Online
Buy ibogaine-hcl-1gram Online
Email: ibogadeals@gmail.com/sales@ibogadeals.com
what'sapp number: +1(631)3174860
website: https://www.ibogadeals.com/