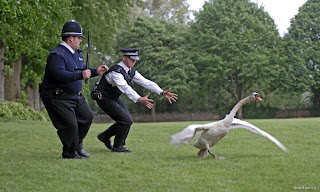 Sometimes it takes me a while to want to see anything with, err, British accents. Their articulate manner of speaking, so eloquently makes my stomach churn. I’m especially not a fan of period pieces. I don’t think I could ever sit through an entire movie having anything to do with the words Jane and Austen. However, there are plenty of British imports, horror mostly, that have made it past my “but it has British accents” way of filtering out to see. I saw “28 Days Later.” Loved it. I saw “The Descent.” It was one of the best of 2006. I saw “Shaun of the Dead.” It was hysterically gory. And here comes the next British import: a spoof of cop action movies mostly in the vein of Michael Bay. I unfortunately had a mixed reaction. Let’s discuss.

Director Edgar Wright has an eclectic style all his own. He uses lots of flashy editing, but not because he thinks it’s cool. It’s because he knows that other directors think it’s cool. He’s in on the joke. He directed "Shaun of the Dead" with finesse. He knew the zombie formula very well. And his fake trailer segment “Don’t” in the “Grindhouse” double feature is hysterical. He understands parody. In "Hot Fuzz" it seems like there’s too much going on. He can’t really focus. What genre is he spoofing? Romantic comedy? Police procedural? Horror? Action? I’m not so sure either.

Simon Pegg is a great comic actor. He’s also a great actor beyond just humor. He gets inside his overachieving London police officer character Sgt. Nicholas Angel with humorous depth. He also co-wrote the film with Wright and they offer some genuinely funny moments. (And odd cameos by Peter Jackson and Cate Blanchett, but good luck spotting them) It’s just that the screenplay is a little awkward. Just when what seems like the final plot twist is revealed there’s still 50 minutes to go. The first half is more “Police Academy” and the second half is more “Bad Boys.” And the movie's plot goes from ridiculous to absurd in no time flat (although I guess you have to blame Michael Bay on that one).

Angel is promoted and reassigned (because he's too good at his job) to Sargeant at a hamlet's police service, which is home to some of the most inept police officers since "The Naked Gun." Jim Broadbent his here as Inspector Frank Butterman. “Shaun” alum Nick Frost is his son Danny. We have the Andys who are two cocky, mustached incompetents. An old geezer who’s accent is so thick it sounds like he is mentally challenged. And they throw in a female officer to spice things up. All of these characters add mildly funny bits, but they’re definitely not up to par with what “Shaun’s” supporting characters had to add.

And let’s not forget the suspected bad guy which includes former 007 Timothy Dalton as the owner of the local supermarket. He first tells Sgt. Angel that he’s a slasher…of low prices. But right away we know this guy is really up to no good. Eventually a serial killer begins stalking this safe village. And it turns out that the culprit may have some accomplices. There is an entire coverup that Angel intends to uncover. Meanwhile, there are some scattered gross out deaths that seem left over from the filmmaker’s previous zombie comedy, but they were welcomed nonetheless. And it’s not until the end of the film that all the slow motiona action, car chases and gunfire occur. It's all well staged, (as good as Mr. Bay) but by that point I didn’t really care too much.

“Hot Fuzz” has its amusing moments and some genuine laughs. It knows what it’s trying to do, but I wish it went about it in a different way. Some of the later plot points are completely outrageous, which bogs down the story but does add more potential comedy. I really thought the second half was just odd. Although seeing a priest getting shot and proclaiming “Jesus Christ!” made me laugh more than it should. It’s not as dumb as “Police Academy” and not as smart as “The Naked Gun.” And as far as being similar to "Reno 911," "Point Break" or "Bad Boys" who knows, because I had the good fortune to miss out on those. GRADE B-

Hiya! This is the third time visiting now and I really just wanted
tto sayy I truley get pleasure from looking at yoyr blog website.

I decided to bookmark it at reddit.com with your title: Blogger:
Chris' Cineema Center and your Domaikn name: https://www.blogger.com/comment.g?postID=6158020497011008362&blogID=19612053. I hope this is okay
with you, I'm making an attempt to give your excellent blog
a bit more exposure. Be back soon.

Feel free to surf to my weblog; Clash of Clans Hacker

I am not certain the place you're getting
your info, but good topic. I needs to spend a while finding out
more or understanding more. Thanks for fantastic info I used to be searching
for this information for my mission.

The trick to making free classified ads work is you have to cram the ad with a lot
of content in order to get ranked in with the search engines.
If you can't find anyone that uses a house sitter,
look in your local 'jobs wanted' newspaper classified ads and
interview some local people'but do check references.
Secondary niches who you will find contact you from your ads are Absentee
Owners, Probate and bankruptcy.

continuously i used to read smaller content that as well clear their
motive, and that is also happening with this post which I am
reading here.