A Bug’s Life: “Spiderman 3” is a Web of Summer Fun 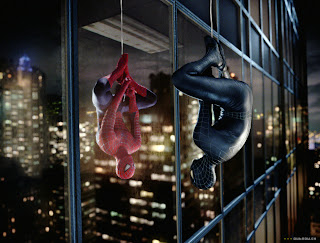 Don’t be fooled by some of the critics’ lesser reviews of the third installment of the wildly popular Spiderman series. While I’d have to agree that you’re jaw won’t drop and you won’t be overwhelmed by feelings of awesomeness, my spidey sense tells me that if you enjoyed the first two films, there’s still plenty to love. Sam Raimi returns to the helm to add his trademark style of fun, humor and enjoyable action into this pumped-up, song-filled (kind of) tale of Peter Parker, his webslinging alter ego, and the love of his life Mary Jane Watson.

Raimi and his older brother Ivan have written this third script with help from “Spidey 2” scribe Alvin Sargent. Overall it’s a mixed bag. There is a lot to be excited about. A meteorite crashes down which unleashes a creepy, crawly black substance that will be important later on. We’re introduced to criminal-on-the-run Flint Marko (Thomas Haden Church) who just may be responsible for Peter’s uncle’s tragic murder. He falls into a government experiment and becomes the villainous CGI-centric Sandman, whose effects are startling to witness.

The Raimis also introduce several other characters. Topher Grace stars as freelance Daily Bugle photographer (read: Peter’s rival) Eddie Brock. He will turn into the villain Venom, which is one of the coolest villains to hit a Spiderman movie since Doc Ock. His semi-girlfriend is New York City Captain Stacy’s (James Cromwell) daughter Gwen (Bryce Dallas Howard, who I still haven’t forgiven for Lady in the Water, shudder). She has a slightly annoying perky quality that seems right at home in a Sam Raimi/comic book movie. Daddy Ron Howard must be proud. Sam Raimi regular Bruce Campbell turns in an amusing cameo as a French restaurant’s maître d’. All of these characters are basically as interesting as they need to be and nothing more.

And that’s okay, because those that have returned are in fine form as well. Toby Maguire is a great Peter Parker and he even makes a great superhero. At the film’s start his in-limbo friendship with Harry (James Franco) takes a turn for the worse when he begins behaving like his father’s (Willem Dafoe) psychotic Green Goblin character. Except Harry’s villain is much cooler, hipper and interesting. (IMDb refers to Harry’s alter ego as the “New Goblin” whether that’s accurate is beyond me) I enjoyed Harry’s character arc a lot more than I thought I would. But what audiences really want to know is how Peter and Mary Jane (Kirsten Dunst) are doing. Peter wants to marry MJ but with the introduction of Gwen that’s highly unlikely. Jealous are we, MJ? There is some soapy love triangle stuff going on here, which will either bore you or be entertaining enough so that you won’t truly mind. And I’d be a horrible critic if I didn’t mention J.K. Simmons who shines and provides big laughs as always as the Daily Bugle’s editor-in-chief.

And not only does this new Spiderman adventure contain new villains but it contains singing, dancing and lots of crying. Apparently this is bad for some critics but I highly enjoyed it. MJ is in a Tony-award winning musical on Broadway and when Peter Parker becomes infected with a certain outer space black slime, it not only brings out his dark side, but his dancing side as well. If you thought the “Rain Drops Keep Falling on My Head” segment in Part 2 was corny, just wait till you see what is in store for you here. It seems odd and out of place, but it definitely goes with Peter’s new dark alter ego (complete with emo bangs and eye liner) and I welcomed it.

While most people will find something to complain about, (I guess technically Sandman’s story could be completely removed without any real loss, but his effects are awesome) you’re bound to enjoy some aspect of Spiderman’s third go round (such as anything having to due with Venom). It has a great mix of action and slow talky parts and yet you’ll probably never even notice that the film runs over two hours. It’s impossible to top the amazing second chapter, but this is definitely a worthy conclusion of the Spiderman trilogy. Of course, this franchise is bound to keep going and going, so enjoy these movies while they’re worth your time and money. GRADE: B+


NOTE: I heard that Bono is writing the music for Spiderman’s Broadway debut. Just a fun fact, do what you want with it.