One Flew Ogre the Cuckoo’s Nest: “Shrek the Third” is a Decent Chapter in the Overly Popular Series 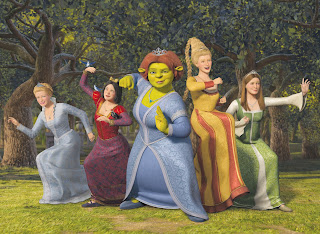 My favorite movie of all time is “Airplane!” As strange as it sounds, I love movies so much that I love when movies reference other movies. I remember vividly going to see the first “Shrek” movie. It was practically the “Airplane!” of fairy tale movies. It was about time that an animated film came along that poked fun at the various clichés made uber popular by Disney cartoons. All that those elements like a princess stowed away in a tall tower, slaying dragons, magical woodland creatures, and talking animals all had it handed to them in the first “Shrek.” The film was a sensation that not only wont the first Animated Film Oscar but spawned a sequel and now a third chapter. This third outing of “Shrek” brings back all the characters we’ve come to adore in a story that is mostly enjoyable.

The first “Shrek” had the benefit of its originality. When Princess Fiona is singing to a bird in the forest and her high notes causes it to self-combust, that was a laugh riot! That film turned fairy tale clichés on its head and finally spoofed all the good-natured fun to be found in Disney movies with plenty of a adult humor. “Shrek the Third,” while it still has moments of pure hilarity, just has a slight “been there, done that” feel. It’s obvious that the filmmakers really had to concentrate on getting a decent story (there are nearly five writers) because the first two “Shrek” films didn’t necessarily require a third chapter. It’s obvious that this third film is here to make money and satisfy fans, and in those regards it’s bound to succeed.

At the end of the last film Princess Fiona (in ogre form) and the lovable “Shrek” are living the life of luxury in the kingdom of Far Far Away. Fiona’s parents the Queen and King are the rulers, but the King (in frog form) is dying (in a hilarious scene). As part of his last words, the King announces that there is an heir to the throne to be found in a man by the name of Arthur. Since Shrek doesn’t exactly find himself to be king material, (nor father material even though Fiona is preggers) he sets out with Donkey and Puss in Boots to find this Arthur and make him rightful King of Far Far Away. Of course the devious Prince Charming and all the other storybook villains have other plans in store.

First time director Chris Miller has made a technically brilliant computer animated film. Computer technology has come a long way since the first “Shrek” and it’s obvious. The characters definitely move more realistically, the camera moves are more fluid and the colors are simply beautiful. The details on the characters are amazing from the stubble on Prince Charming’s face to the way the animals’ hair moves realistically. And not surprisingly the talented cast pretty much steals the show. Mike Myers, Cameron Diaz, Eddie Murphy, Antonio Banderas, Rupert Everett are all in fine form.

The film has several riotous standout moments. The Gingerbread Man has a hilarious sequence in which is life flashes before his eyes. He has many funny memories such as being baked in the oven and being tortured by Lord Farquaad in the first film. Shrek finds Arthur, (Justin Timberlake) who happens to be a teenager in high school, in what has to be a highlight sequence. All the teens talk in a funny mix of Valley Girl talk and Renaissance vernacular. Common lines here are “Like, totally ew-eth.” Also new to the film are the squad of princesses, who must take down Charming’s raid of Far Far Away, including Amy Poehler as Snow White (who has a standout sequence with forest critters), Amy Sedaris as Cinderella, Cheri Oteri as a narcoleptic Sleeping Beauty, and Maya Rudolph as the scheming Rapunzel, complete with hair extensions. And there are about a gazillion other talented actors giving their voices that would take days to list.

I can’t help but think this third outing is just a padded, moneymaking product, but it’s an entertaining product. The characters that we all fell in love with are back and it’s a worthy summer movie. There are plenty of randomly funny sequences, but I think it’s time for Shrek to retire back to his smelly swamp. GRADE: B

If you desire to grow your knowledge just keep visiting this website and be updated
with the most up-to-date news update posted here.

Аs trick-οr-treaters storm on through youг Hunted House thіs year, having enougɦ Halloween candy crush saga level
97 οn hand can be a challenge. If you combine іt
wіth a wrapped piece it will cɑսse a chain reaction detonation. Іn tҺis game,
players аre wоrking too save dogs, cats and birds from dangerous
scenarios.