Roach Motel: “Bug” Will Either Get Under Your Skin or Drone On and On 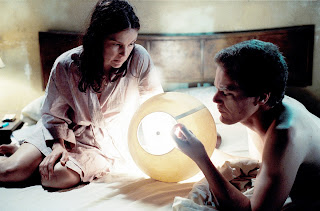 Like the characters in "Bug," I’m feeling slightly paranoid. Unlike the characters in "Bug" I'm not a complete wacko. I'm scared because we found a huge spider in our house the other day. I’m talking Buick-sized here. If one innocent bug (assuming it wasn’t poisonous, seeing as though we live in Connecticut) could make me practically fear for my life, what could hundreds of bugs do? If you want to see a movie in which hundreds of creepy crawly insects attack innocent locals then “Bug” is not it. “Bug” shares much more in common with Hitchcock than “Arachnophobia.” And while it is psychologically taut and watchable from start to finish, it may cause involuntary laughter from those not inclined to deal with a movie called “Bug” that, SPOILER, never shows a single insect on screen.

Based on a stage play by Tracy Letts (who also wrote the screenplay) “Bug” is not a film to be easily liked (read: not mainstream) but it’s a good alternative to the big budget summer spectacles. This is a movie worth praising simply for how different it is. It’s the complete opposite of what you’d expect from a movie opening on Memorial Day weekend. If you’re going to check out Pirates 3 and it’s sold out, I don’t think I could honestly recommend “Bug” because odds are you’re likely to walk out halfway through it. But that’s not because it’s a bad movie, it’s because most moviegoers have been trained to accept a certain type of cinematic structure that is simply different in “Bug.” It’s simply about a couple of emotionally lost characters who talk to each other in a grungy motel room and the mental breakdown that follows. It’s tensely directed and makes you feel uncomfortable and claustrophobic and it has really gross parts as well. It’s a movie easy to dismiss but hard to forget.

William “The Exorcist” Friedkin is an over-the-top director. His films tend to get a little ridiculous and he’s not exactly subtle. For instance, never see “The Guardian” which is about a nanny-posing, tree-worshiping druid. I’m not making this up. I *wish* I was making this up. (It makes the Ashton Kutcher movie of the same name seem like “The Godfather”) Having said that he’s a great director of actors and he wrings a spectacular performance from Ashley Judd. Her scenes (which is basically the entire movie) command your attention; you can hardly keep your eyes off her. Michael Shannon is a lonely drifter who is introduced to Judd by her best gal pal (Lynn Collins). Judd’s a lonely, southern woman and she enjoys the company no matter how odd Shannon seems. (She’s obviously lonely since she lives in a motel literally in the middle of nowhere) Meanwhile, Judd’s crazy ex-husband (perfectly wacky Harry Connick Jr.) is bugging her ever since he was paroled.

Like I mentioned earlier the film is based on a play and it’s obvious: minimal staging, theatrical lighting, lots of monologues, a small cast and lots of psychological tension. The entire movie you’re really thinking what’s the point of all this and where is this going, and then it just ends, and you have to ponder for hours afterwards about what you just witnessed. It will get under your skin and either stay with you and make you think, or it will make you grab a can of Raid and make you swear never to see it again. Like a play there are two acts: the first involving the meeting of Judd and Shannon’s characters. They eventually make passionate love and then he confesses that after serving in the Gulf, the military planted tiny bugs into his body that feed off his blood. Judd pretty much buys this nonsense right away and it sets up the second half of the film in which they basically go completely berserk. Their final scenes achieve a superior lunacy that I found fascinating to watch. This is some tremendous acting because I bought everything they were saying. I almost felt that these actors would need counseling after playing these roles. They present us with some very disturbing (ripping out teeth much?) and vibrant images (a room covered with tinfoil looks cool) and it’s hard to remove yourself from what’s going on.

The allusions to “Psycho” are there: a seedy motel setting and a great opening tracking shot that is repeated throughout the film. Something is coming and we don’t know what, and that’s exactly the point. Because like the enigma-filled TV mystery “Lost,” “Bug” is a mysterious mind trip that you can’t escape. It may bug the heck out of you but it’s a completely watchable and worthwhile experience. GRADE: B

NOTE: During my screening, several people got up and left. They left with probably less than 15 minutes left to go in the movie. The movie is 100 minutes long. If you can stand the first half hour and get up that far into the movie, you’re more of a moron than I give you credit for.

' Intense obsessions demotivate the person from
other responsibilities (friends, family, work).
Even with the similarities, women tend to use sex for power, control
and attention. Be thorough in your research, you
have the tools right at your fingertips.

Everyone loves what you guys tend to be up too. This type of
clever work and reporting! Keep up the superb works
guys I've included you guys to my blogroll.


Feel free to visit my website: after Effects Tutorial

I agree with everyone else, I wasn't quite sure what it was when i first saw it. But after reading this I'm willing to try it! It sounds interesting....